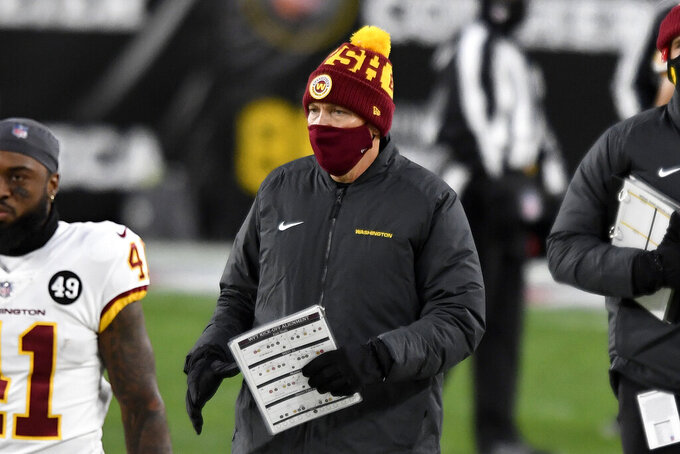 Washington Football Team head coach Ron Rivera, center, walks on the sideline during the first half of an NFL football game against the Pittsburgh Steelers in Pittsburgh, Monday, Dec. 7, 2020. (AP Photo/Barry Reeger)

With Alex Smith leading the way in the latest remarkable development of his oh-so-remarkable comeback, maybe it shouldn’t be so surprising that Washington — below .500, representing the lowly NFC East, with little help from two leading playmakers, facing a two-TD hole on the road against unbeaten Pittsburgh — would pull off a victory.

This no-nickname team’s first season under coach Ron Rivera is making the ridiculous seem routine at this point.

Jon Bostic made a sliding interception when Montez Sweat tipped Ben Roethlisberger’s pass at the line of scrimmage with about two minutes left, and Washington’s tremendous defensive performance made its dink-and-dunk output on offense stand up for a 23-17 win Monday that dropped Pittsburgh’s record to 11-1.

“We knew it was going to be a little bit ugly,” said Smith, who last month made his first start in two years after needing 17 operations to recover from a broken right leg. “Proud of our team to find a way to win this game like that, especially as young as we are. We showed a lot of maturity.”

Smith downplayed what looked somewhat scary from afar: blood coming through his left uniform pants and sock late in the first half.

“Never,” Smith said, “had one gush like that.” But he said it wasn’t a big deal and didn’t require stitches at halftime.

Washington trailed 14-0 in the second quarter before a late field goal at the end of the half and a 14-play, 82-yard touchdown drive early in the third period cut that deficit to four points.

Dustin Hopkins made a pair of 45-yard field goals down the stretch.

“We talk about fighting. There’s no reason to stop playing. Doesn’t matter what the score is. And I just think that’s who they are,” Rivera said. “This is a bunch of young guys that’s learning how to play with some veterans sprinkled in at the right positions. We’re growing and we’re learning.”

Rivera congratulated his players coming off the field after their third victory in a row to keep pace with the New York Giants atop their division at 5-7.

“Usually, I come in and collect my thoughts,” Rivera said. “I wanted to greet everybody as they were coming in. They earned it.”

Washington’s defense was a big part of that, providing a turnover on downs after Pittsburgh had a fourth-and-goal at the 1, holding the Steelers to three points in the second half and getting Bostic’s victory-sealing pick off one of Sweat’s trio of batted balls.

“The defense bowed their neck and saved me,” Rivera said.

But his players credited him with allowing them to head into this game thinking they had a chance against what everyone else figured was a much better Steelers team.

“Coach Rivera, he just put it in our head that we can do this,” said Cam Sims, one of the unheralded players who contributed on offense, with five catches for 92 yards.

Thomas had nine receptions for 98 yards and his score, plus recovered a fumble, while running back J.D. McKissic pulled in 10 catches for 70 yards.

That was important because two key players were not factors at all: leading rusher Antonio Gibson left in the first quarter with a hurt toe after two carries for 14 yards, and leading receiver Terry McLaurin was limited to two catches for 14 yards.

“Your reputation, your record — when you get on the field, those things don’t matter. What matters is who plays the best,” Rivera said. “And I thought our guys played pretty doggone well today.”