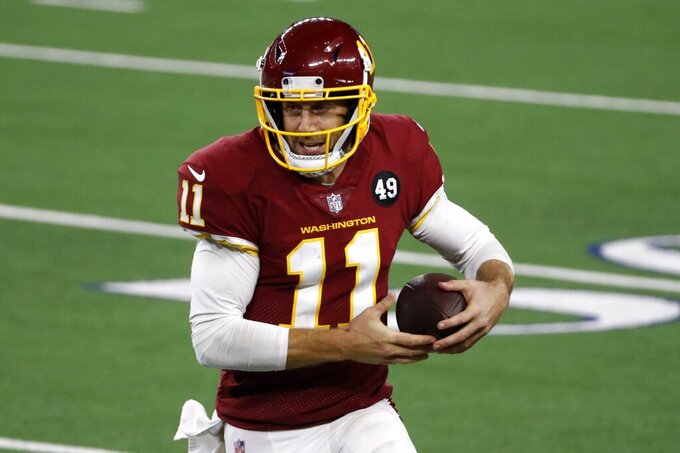 Washington Football Team quarterback Alex Smith (11) runs the ball in the second half of an NFL football game against the Dallas Cowboys in Arlington, Texas, Thursday, Nov. 26, 2020. (AP Photo/Roger Steinman)

When Alex Smith steps on the field to take on the San Francisco 49ers for just the second time since being traded away more than seven years ago, little will look familiar.

The roster and coaching staff will have completely changed when Washington (5-7) takes on San Francisco (5-7) on Sunday in a matchup of teams fighting for a playoff spot. Even the location will be different, with the Niners temporarily playing their home games in Arizona after being kicked out of their home stadium because of coronavirus protocols.

“I don’t think it means anything at this point,” Smith said about facing the team that drafted him first overall in 2005. “It’s so far removed. I’m looking forward to seeing the handful of guys that are still around. Throw in the fact that we’re playing in Arizona, that even obviously makes it more different.”

Smith said his time in San Francisco seems like “a lifetime ago.” He has gone through plenty since he was traded to Kansas City in 2013 after losing his starting job to Colin Kaepernick.

He spent five mostly successful years with the Chiefs, going to the playoffs four times, before being traded to Washington to make way for Patrick Mahomes.

Smith got off to a solid start in Washington in 2018 before a horrific, career-threatening leg injury sidelined him for more than a year. Niners coach Kyle Shanahan said Smith’s comeback has earned him as much respect as he has for any player.

“For him to go through what he went through and to still want to come back, it’s definitely not a money thing,” Shanahan said. “The guy does all right in that area. It’s not something he had to do. It shows why he has been successful in everything he’s done.”

That success wasn’t always there in his eight years in San Francisco. He struggled early on the field, dealt with injuries and coaches who didn’t always put him in the best position to succeed or show belief in his ability.

Smith got through all that and helped the Niners reach the NFC championship game in the 2011 season before losing his starting job to Kaepernick midway through the following season after a concussion. That left Smith as a spectator for the Super Bowl that season, and eventually led to the end of his roller-coaster ride with San Francisco.

“It was hard, really hard,” he said. “I don’t wish that on anybody. I think that’s certainly part of also why I try to help young QBs. I don’t want anybody to go through that. It was very, very difficult. It was a hard road to go down, and I learned a lot from it. But I don’t think it’s totally necessary. I don’t think it had to be that way, looking back. A lot of that was my fault as well. I did learn a lot from it at that time, but it doesn’t have to be that way.”

Smith isn’t the only player going up against his former team. Niners left tackle Trent Williams and tight end Jordan Reed will face Washington after leaving this offseason. Williams sat out last year in a medical dispute with the front office before finally forcing his way out in a trade. Reed left as a free agent, and both have contributed to the 49ers, with Williams stepping in to replace former Pro Bowler Joe Staley.

“He’s a very strong leader in this locker room,” quarterback Nick Mullens said. “He speaks up when things need to be said. Obviously his resume speaks for itself. But I’m very thankful that he’s got my blindside.”

Washington’s been a completely different team before and after halftime. The pattern was established in Week 1: Down 17-7 after the first half, Washington came back to beat Philadelphia by outscoring the Eagles 20-0 in the second half. And it’s continued all the way until now: Ron Rivera’s club was down 14-3 against Pittsburgh after two quarters Monday but came back to win by outdoing the Steelers 20-3 the rest of the way.

For the season, Washington is trailing by an average of 15.3 to 8.2 after the first half, but getting the better of opponents by a margin of 13.8 to 6.3 in the second half.

Rivera said he’d love to have fast starts, then added with a chuckle: “It seems to be working for us, so I guess it might be a part of our strategy going forward.”

Heading into Washington’s last game, second-year wideout Terry McLaurin led the club in catches, targets and yards receiving by wide margins. And he still does, even after being held to a pair of receptions for 14 yards by Pittsburgh. But the attention on McLaurin helped tight end Logan Thomas (9 catches, 98 yards, TD) and running back J.D. McKissic (10 catches, 70 yards) have career days.

“The more they respect him, the more opportunities are going to be created for his teammates,” Rivera said. “That’s the one thing Terry doesn’t get frustrated about. He understands that. He goes out and relishes the chance to create opportunities for himself to make plays.”