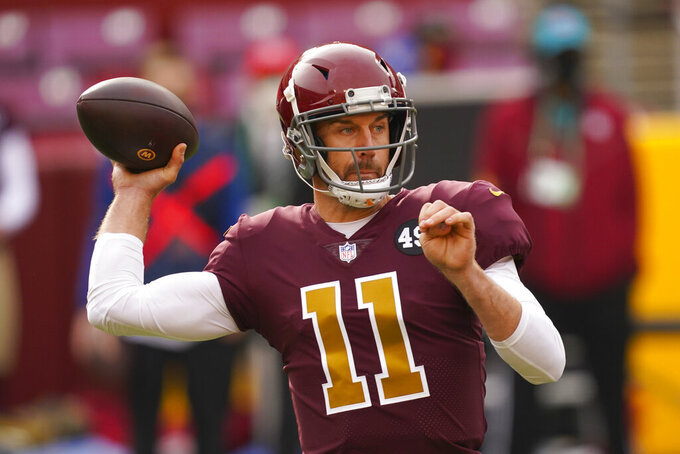 Alex Smith is showing why Ron Rivera wanted an experienced quarterback to start for Washington, and has the team in position to compete for a division title because the NFC East is so weak.

Smith calmly guided Washington to a 20-9 comeback victory against Cincinnati on Sunday after No. 1 overall draft pick Joe Burrow went down and sapped the Bengals' energy and efficiency. Smith's first victory since breaking his right leg almost exactly two years earlier was the perfect example of how the 36-year-old quarterback can still win games in the NFL if he has enough talent around him.

“We’re an incredibly young team that is still kind of finding out who we are: our strengths, finding out how to win, trusting in each other,” Smith said. “It’s important for us to kind of continue to keep getting better.”

The next step in that comes Thursday with a short turnaround before visiting the Dallas Cowboys for a annual Thanksgiving Day game. After Smith had a career-high 38 completions and 390 passing yards at Detroit the previous week and managed the game against Cincinnati, Washington is hoping momentum carries more weight than fatigue.

“You try to have as much carryover from the last couple weeks as possible,” Rivera said Monday.

Washington's offense is getting the job done with Smith throwing to second-year star Terry McLaurin, receivers Steven Sims and Cam Sims, and third-down back J.D. McKissic. Rookie running back Antonio Gibson has eight rushing touchdowns after playing receiver for most of college at Memphis.

“Having a vet at the quarterback position changes (things) dramatically," Gibson said. "He’s been there and done that, so there’s not too much pressure on him. He relaxes in the huddle. I feel like for me, anyway, having a vet there just helps in that situation.”

The defense didn't force Cincinnati to punt once in the first half while Burrow was at quarterback. A couple of Bengals drives ended with missed field goals and another a fumble forced by No. 2 overall draft pick Chase Young near the goal line, but staying on the field so long and giving up yards is a matter of concern.

It got easier when Burrow injured his left knee and gave way to inexperienced backup Ryan Finley. The defense swarmed at that point, which might be a source of confidence moving forward.

“We gave up some yardage early in the game in the first half (and) ultimately bent but didn’t break,” veteran defensive end Ryan Kerrigan said. "Then in the second half, I felt like I liked what I saw a lot more. We got off the field more quickly, a bunch of three-and-outs, and hopefully we can continue that.”

“I thought he put himself in the position to make plays,” Rivera said. “The most important thing is just being where you need to be when the ball arrives. He was there.”

Tight end Logan Thomas was targeted five times by Smith and finished with just two catches for 3 yards. Thomas was a popular weapon for previous starter Kyle Allen but has a smaller role in the offense now.

Morgan Moses fared well moving from right tackle to left in place of injured starter Cornelius Lucas, and the secondary handled the absence of safety Deshazor Everett. It remains to be seen if ankle injuries to Lucas and Everett heal in time for either or both to play at Dallas.

4 — Sacks in the second half for Washington, which can have a fearsome pass rush if it gets the lead and can send Young, Kerrigan, Montez Sweat and Co. flying at opposing quarterbacks.

A lot of virtual meetings and rest before taking on Andy Dalton and the Cowboys, who open as 1-point favorites after beating Minnesota. First place in the NFC East, at least temporarily, is at stake.