All 12 playoff coaches are tied to Bill Walsh or Parcells 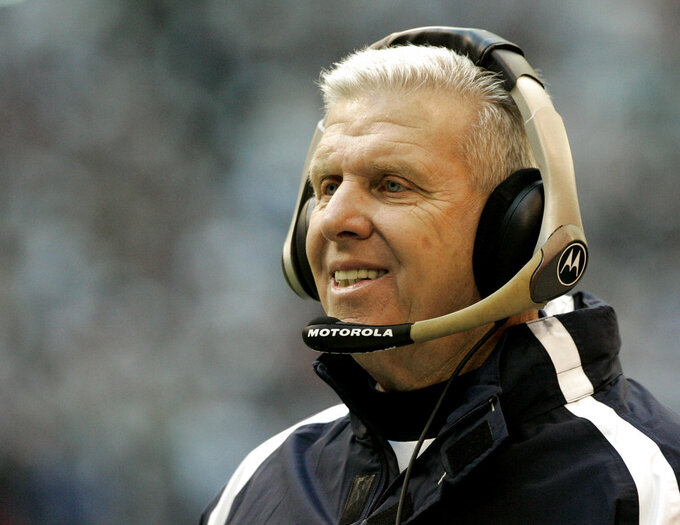 FILE - In this Dec. 25, 2006, file photo, Dallas Cowboys coach Bill Parcells on the sideline during the first quarter against the Philadelphia Eagles during an NFL football game in Irving, Texas. There is no denying the impact on the coaching world that Bill Walsh and Parcells have had. The hard evidence is apparent again as the NFL playoffs begin. All 12 of the coaches have some sort of tie-in to either three-time Super Bowl champion Walsh or two-time winner Parcells. Yes, all 12. (AP Photo/Donna McWilliam, File)

There is no denying the impact on the coaching world that Bill Walsh and Bill Parcells have had. The hard evidence is apparent again as the NFL playoffs begin.

All 12 of the coaches have some sort of tie-in to either three-time Super Bowl champion Walsh or two-time winner Parcells. Yes, all 12.

Some are direct: New England's Bill Belichick, New Orleans' Sean Payton and the Chargers' Anthony Lynn were assistants under Parcells.

Other affiliations on the coaching tree go out on a bit of a limb. The Colts' Frank Reich worked for Doug Pederson, who coached under Andy Reid, who worked for Mike Holmgren, who was a Walsh protege.

It all gets a bit complicated, but as Bob Glauber, the NFL columnist at Newsday points out, all the connections are legitimate.

Indeed, Glauber's recent book, "Guts And Genius," is all about not only Walsh and Parcells, but Washington's Joe Gibbs. The subtitle of the book tells it all: The story of three unlikely coaches who came to dominate the NFL in the '80s.

"As I was researching the book, I discovered how those two coaches really concentrated on helping other coaches," says Glauber, the current president of the Pro Football Writers of America. "Parcells learned from his high school basketball coach, Mickey Corcoran, that he had to give back and help other coaches, and he always lived by that rule.

"Walsh was so upset he was passed over as Bengals head coach by Paul Brown (in 1976) that he promised himself that if he ever did get a head coaching job, he would make it a point to help develop other coaches. He started what I think is the most productive coaching tree in pro sports history, not just in the NFL."

"He knew how to train coaches and he concentrated on it and it meant a lot to him to see them become successful coaches," Glauber says.

"It is not coincidental that for Walsh and Parcells, their lifeblood runs through these playoffs this year.

Glauber points out that since 1981, 30 of the 37 Super Bowls have been won by a coach with ties to either of Walsh or Parcells. After the big game in Atlanta, 18 of the last 19 champions will have some affiliation with those two Bills.

Here's the breakdown on the other head coaches in this year's playoffs, which begin this weekend with the wild-card round.

Seattle's Pete Carroll: coached with 49ers under George Seifert, who was Walsh's defensive guru and Walsh's replacement as head coach in San Francisco

Interestingly, while Walsh was the master of the West Coast offense, some of his disciples have a defensive bent (Carroll, Harbaugh). And several of defensive mastermind Parcells' guys — Payton, Belichick — win with offense. Of course, Payton has Drew Brees and Belichick has Tom Brady.