'All Madden' documentary a labor of love for Fox Sports 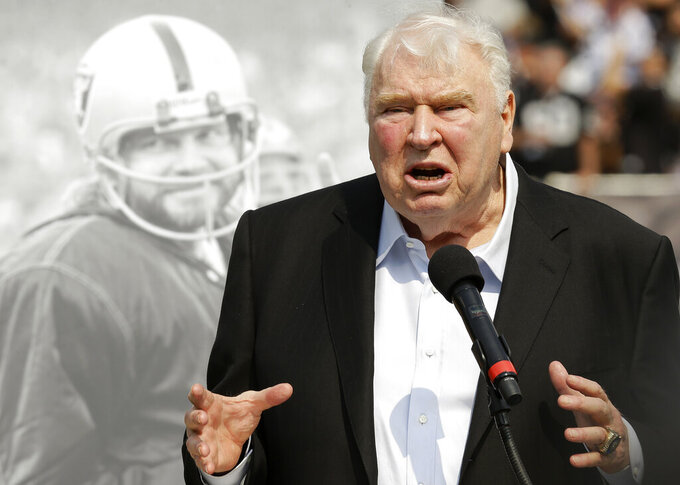 FILE - Former Oakland Raiders head coach John Madden speaks about former quarterback Ken Stabler, pictured at rear, at a ceremony honoring Stabler during halftime of an NFL football game between the Raiders and the Cincinnati Bengals in Oakland, Calif., on Sept. 13, 2015. 'All Madden' documentary a labor of love for Fox Sports. Many gamers will be receiving the latest edition of the “Madden” video game for the holidays. On Saturday, Dec. 25, 2021, some will even find out for the first time that the name behind the popular franchise was a successful coach and broadcaster. (AP Photo/Ben Margot, File)

Many gamers will receive the latest edition of the “Madden” video game for the holidays. On Saturday, some will even find out for the first time that the name behind the popular franchise was a successful coach and broadcaster.

Or as NFL commissioner Roger Goodell succinctly puts it: “John Madden is to the NFL what Elvis Presley is to rock-and-roll. He’s the king.”

Madden’s successful career and impact on generations of players and fans is the focus of a 90-minute documentary, appropriately named “All Madden.” It will premiere Saturday at 2 p.m. EST on Fox.

“When you get to the younger generations of people that only know Madden as a game, don’t even necessarily know it’s a person. And that that name has a life behind it, and that life has multiple careers within it. The ability to share that ride has been a great joy,” said Fox Sports’ Tom Rinaldi, the project’s executive producer and co-director.

“He still permeates the game, which is an amazing tribute to his reach and all the different ways beyond football that he seeped into American popular culture.”

Madden retired in 1979 after coaching the Oakland Raiders for 10 years and one Super Bowl title. His .739 winning percentage is second to Vince Lombardi among those who have coached in at least 140 regular-season and playoff games.

Madden says he did not want to become a television analyst at first, but developed a passion for it the more he learned about it. He remains the only football commentator who has worked for all four broadcast networks.

The documentary features an extensive interview with the 85-year-old Madden and includes his wife, Virginia, and sons Joe and Mike. It also includes Lawrence Taylor, Brett Favre, Troy Aikman, Bill Parcells, Bill Belichick and Goodell among the 38 people interviewed.

Rinaldi joined Fox in January, following a successful 19-year tenure at ESPN. In February, Fox Sports CEO and Executive Producer Eric Shanks approached him about the Madden project. Rinaldi and co-director Joe Santos then spent most of the year interviewing people and putting it together.

Shanks came to Fox when it acquired the NFL beginning with the 1994 season and was part of the production crew for Madden and Pat Summerall.

“All Madden” is also significant because it is the first long-form documentary that has been done by Fox Sports, whereas past projects were contracted to production companies.

“To have the subject matter be John, I think it’s absolutely perfect because of what he has meant to Fox,” Santos said. “This storyline to me should be dealt with extreme care. So to manage those waters and go through the whole 10-month process, why not be close to it? Why not have the executive producers be able to see every frame of it and be updated every week on what’s going on, as opposed to just waiting for something to be shipped to you 10 months later and hope that you’re happy with it?”

Besides the interviews, the documentary features videos of Madden going to games on his bus and outtakes during production meetings. It also includes Madden hosting “Saturday Night Live” in 1982 and his various commercials over the years.

Rinaldi and Santos agree that an essential part of the documentary is hearing from Madden’s family for the first time.

“The family, like Tom says, really gave us the most important thread throughout the doc. It’s a perspective of John that no one knows,” Santos said. “That was one of the surprises and one of the gifts that interviewing Virginia, Mike, and Joe presented to us.”