Allen: 'Bad day at the office' for Saints offense vs. Ravens 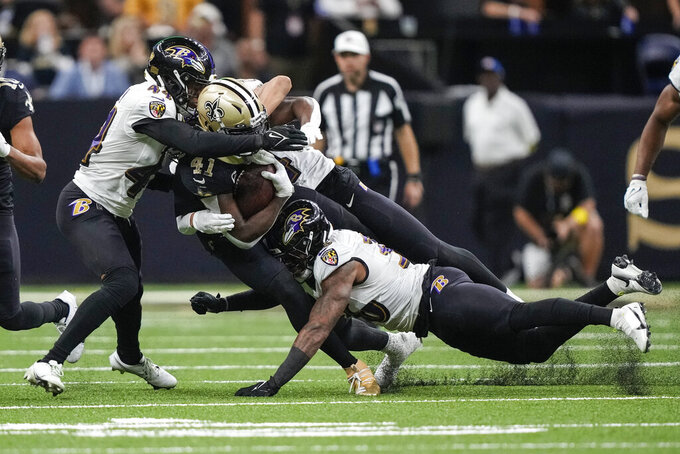 It was that kind of a night for New Orleans' offense.

A week after a comprehensive 24-0 shutout of the Las Vegas Raiders, the Saints were held to a season-low 243 yards in a tepid 27-13 home loss to the Ravens that dropped them to 3-6.

New Orleans settled for a field goal on the last play of the half after Dalton’s misfire, which sailed off of Callaway’s fingertips, and did not get a touchdown until the game was out of reach late in the fourth quarter.

“Everybody kind of had a hand in it tonight,” Dalton said. “They did a good job with their plan. We need to find ways to make more plays than what we did tonight.”

That number was close to zero for most of the first half. The Saints picked up two first downs on their first four possessions, and one of them came because of a flag for interference on a tipped interception.

Dalton’s longest completion through three quarters was 19 yards, and the running game was just as ineffective. Alvin Kamara, who was stuffed early for no gain on third-and-1, finished with 30 yards on nine carries.

“They did a lot of good things defensively that caused us a lot of challenges,” Saints coach Dennis Allen said. “We’ve got to go back to the drawing board, make some corrections and get better next week.”

New Orleans converted only 3 of 11 third downs after entering with a success rate of 43.8 percent — the eighth best in the NFL.

Blitzing linebacker Tyus Bowser ran in untouched to force a Dalton throwaway on the Saints’ first third down, setting the tone. Linebacker Justin Houston sacked Dalton on the last play of the first quarter, forcing another punt. Cornerback Marlon Humphrey dropped him on third-down blitz to stop the Saints’ first drive of the second half, forcing a 37-yard field that only closed the gap to 17-6.

After a Ravens punt, Houston hit Dalton again, and end Calais Campbell finished him off from the opposite side.

“We’ve got to find ways to hold up in protection, find ways to get the ball out of my hand,” Dalton said. “Guys got to get open on time.”

Lamar Jackson threw a touchdown pass late in the first quarter to put Baltimore up 7-0. The Ravens then controlled the ball on the ground, rushing for 188 yards on 40 carries while winning time of possession 37:47-22:13.

Baltimore put the game out of reach when Houston intercepted a deflected pass and returned it to the New Orleans 17 midway through the fourth quarter, setting up Kenyan Drake’s 4-yard touchdown run for a 27-6 lead.

The Saints scored their lone touchdown on a 41-yard catch-and-run by tight end Juwan Johnson with 4:13 left when Ravens defenders let up because they thought he had stepped out of bounds.

Asked if a game like that might make him reconsider sticking with Dalton over season-opening starter Jameis Winston, Allen said no. The Saints had scored at least 25 in their last five games, averaging 29.6 points.

“Our offense has been pretty good and moved the ball effectively,” he said. “This was not a good game tonight. We had a bad day at the office offensively and we’ve got to improve from it.”