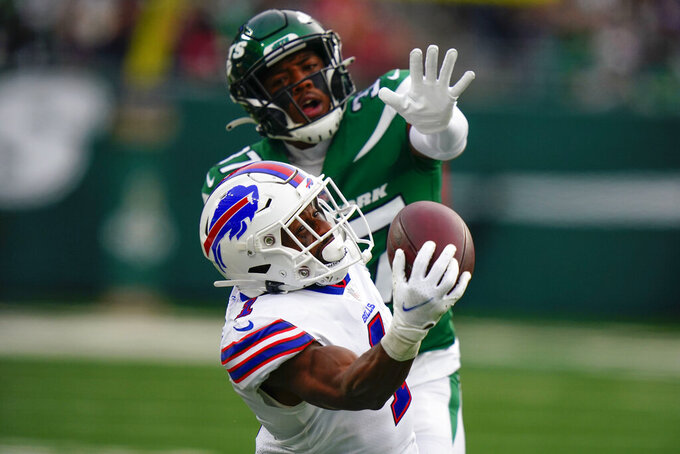 Buffalo Bills' Emmanuel Sanders tries to make a catch during the second half of an NFL football game against the New York Jets, Sunday, Nov. 14, 2021, in East Rutherford, N.J. (AP Photo/Frank Franklin II)

EAST RUTHERFORD, N.J. (AP) — Josh Allen and the Buffalo Bills heard it all after an embarrassing loss last week to Jacksonville.

And then they reminded everyone of why that was probably just an ugly bump in the road with a dominant and thorough thrashing of the New York Jets in a 45-17 victory Sunday.

That's exactly what they were against the Jets.

Allen threw two touchdown passes, Buffalo ran for four scores and the Bills' top-ranked defense intercepted Mike White four times. It was an impressive showing for the Bills (6-3), who rebounded nicely from that 9-6 dud at Jacksonville.

“Having that bad taste in our mouth from last week, not performing to our standard, it kind of put a little more urgency in our preparation,” said cornerback Levi Wallace, who had one of the Bills' four INTs. "We didn’t get enough turnovers last week to give the offense more opportunities.

“I think that was one of our main focus, trying to make the other team one-dimensional — make them throw the ball, which creates turnovers.”

Taron Johnson, Tre’Davious White and Jordan Poyer also picked off White, who made his third straight start for the injured Zach Wilson. It was a big day for the secondary, which had all five starters with a turnover, including Micah Hyde's forced fumble and recovery.

“You saw last week we left some opportunities out there,” Hyde said. “We went back to the lab this week. We knew what type of things would be said about this football team. We put the work in like we do — win, lose or draw.”

Meanwhile, Allen was 21 of 28 for 366 yards with TD passes to Matt Breida and Stefon Diggs with an interception. Breida added a scoring run, as did Devin Singletary, Zack Moss and wide receiver Isaiah McKenzie as Buffalo's offense looked alive and well.

A week after failing to get into the end zone at Jacksonville, Allen and the Bills wasted no time against the Jets (2-7).

After White and the Jets went three-and-out to start the game, Allen marched Buffalo down the field. He avoided a sack and found Breida — in his first game active since Week 2 — streaking downfield for a touchdown and a 7-0 lead.

Johnson easily picked off White on the Jets' next drive, and the Bills added to their lead on Tyler Bass' 29-yard field goal.

Matt Ammendola put New York on the scoreboard with a 48-yarder late in the first half. But the Bills came right back to take a 17-3 halftime lead on Diggs' 12-yard TD catch.

Buffalo picked up right where it left off to start the second half, driving down the field 75 yards on five plays, capped by McKenzie's 8-yard TD run following a 24-yard gain by Emmanuel Sanders on an end-around.

White, trying to get the Jets' offense going, threw deep into double coverage on first down and Tre'Davious White intercepted him to give the Bills the ball right back.

Allen connected with Gabriel Davis for 49 yards, and Breida followed with a 15-yard scamper to make it 31-3. Moss ran it in from 1 yard on Buffalo's next possession, and Singletary had a 2-yard TD run in the fourth quarter to complete the rout.

Wilson is getting closer to a return from a sprained knee ligament and there was some speculation the Jets could continue with White even when the rookie is healthy. His performance against the Bills might have ended all that. White was 24 of 44 for 251 yards and the four INTs before leaving late with an injury and being replaced by Joe Flacco.

Jets coach Robert Saleh said White was cleared to come back, but Flacco stayed in to finish the drive. The Jets are uncertain who’ll start next week against Miami.

“He’s getting better every day,” Saleh said of Wilson. “So we’ll see where he’s at from an injury standpoint before we make any decisions.”

It was another brutally bad performance for the Jets' defense, which has allowed 175 points in its past four games.

Flacco, making his first appearance for the Jets since being acquired from Philadelphia on Oct. 25, threw a 15-yard touchdown pass to Elijah Moore for the game's final score with 2:08 left. It was the 225th TD pass of the 36-year-old veteran's career.

Bills: DT Star Lotulelei was placed on the reserve/COVID-19 list a few hours before kickoff. ... McKenzie appeared to injure his right ankle late in the fourth quarter, but was expected to be OK.

Jets: Play host next Sunday to the AFC East rival Miami Dolphins, who have won their past two.