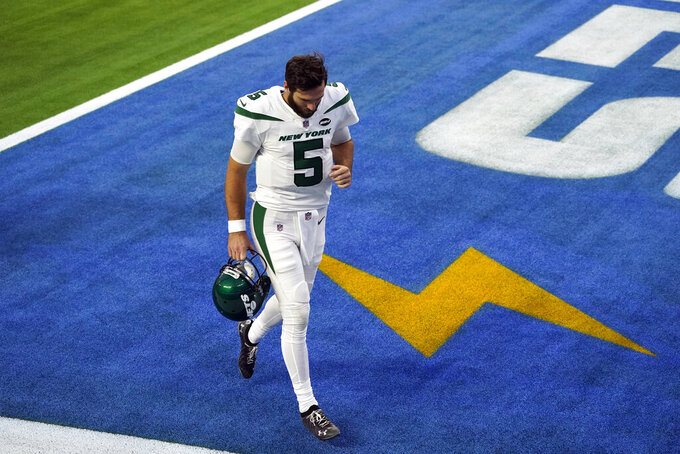 New York Jets quarterback Joe Flacco (5) walks off the field after a loss to to the Los Angeles Chargers during an NFL football game Sunday, Nov. 22, 2020, in Inglewood, Calif. (AP Photo/Jae C. Hong) 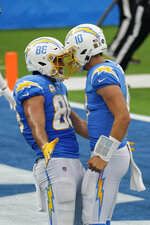 INGLEWOOD, Calif. (AP) — It hasn't taken long for Justin Herbert and Keenan Allen to become one of the more lethal quarterback-receiver duos in the NFL. After Sunday, they can also add record setting.

Allen set a Chargers franchise mark with 16 receptions and Herbert became the first rookie quarterback with five games with three or more touchdown passes as Los Angeles held on for a 34-28 victory over the winless New York Jets to snap a three-game losing streak.

“I didn’t think it was gonna be today. We just got it going. Coach kept calling the number and Herbie kept throwing me the ball,” said Allen, who became the first receiver in NFL history to have six games of 13 catches or more as the Chargers improved to 3-7.

When asked when he thought it would be a prolific day, Allen said late in the first half, when he was already up to 10 receptions for 108 yards (he finished with 146 yards).

Allen also reached a career milestone Sunday, going over 600 career receptions and tying Antonio Brown as the fastest to reach that mark at 96 games.

“He’s very rare to be that big and quick inside and we kind of took advantage of the slot defender with some good open concepts to him,” coach Anthony Lynn said.

Herbert bounced back from a rough game last week at Miami. He completed 37 of 49 passes for 366 yards, and continued to add to his list of rookie superlatives. He extended his mark of multiple touchdown passes with seven and had his fifth 300-yard passing game, becoming the fifth rookie in league history to reach that mark.

Herbert’s 39-yard connection with Mike Williams early in the second quarter made him only the fifth QB in league history to reach 20 TD passes in nine or fewer games. It was also part of a first half that saw him have the most first-half completions (23), attempts (31) and yards (277) by a rookie since at least 1991. Herbert also had a TD pass to Hunter Henry in the quarter as the Chargers had a 24-6 halftime advantage.

“I think we had a great plan going into the week and we went out there and executed. Mike and Keenan stepped up big time so it made my job a lot easier out there,” Herbert said.

Allen’s 13-yard TD in the third quarter to extend the lead for the Chargers (3-7) to 31-13. New York would rally to get within 34-28 in the fourth quarter on Frank Gore’s 1-yard run and Joe Flacco’s 6-yard pass to Chris Herndon.

New York drove to the Chargers 32 with under a minute remaining before turning over the ball on downs.

The Jets — off to the worst start in franchise history — are the 21st team since the merger to begin a season 0-10 and were the first team eliminated from postseason consideration.

“When we look at the tape, we’ll be able to evaluate that part of it to see if we could’ve done something different," said Jets coach Adam Gase of the early defensive struggles. "We were trying to change things up and make it hard. The ball was coming out pretty quick.”

Flacco was 15 of 30 for 205 yards with two touchdowns as he started his fourth game in place of the injured Sam Darnold. He struggled in the first half, including a pick-6 in the first quarter to Tevaughn Campbell that gave the Chargers a 7-6 lead.

“They are a defense that kind of spot drops and we felt like we could take some underneath just guaranteed completions early on in the game, and that didn’t happen," Flacco said. "So I think in the second half, we just made the decision to kind of attack ’em and start to make it happen for ourselves anyway.”

Jets: RB La'Mical Perine and OT George Fant both suffered ankle injuries and did not return. Fant will have an MRI.

Chargers: DE Uchenna Nwosu injured a shoulder during the second quarter and did not return. CB Casey Hayward Jr. (groin) did not return after being injured in the second half. Linebacker and leading tackler Kyzir White missed the game after being placed on the reserve/COVID-19 list on Saturday.

Ty Long had a punt blocked for the third time in four weeks as special teams mistakes once again affected the Chargers early and led to the Jets' first touchdown.

Jets defensive lineman Henry Anderson blew by Joshua Kelley, giving Long no chance to get the kick off. Quentin Williams recovered the ball on the Chargers 29, and Perine went 5 yards up the middle to make it 6-0. It is the fourth straight game the Jets have scored on their opening possession.

Instead of risking a blocked punt late in the fourth quarter, Long ran into the end zone and took a safety.

The special teams problems were not confined to the Chargers. Jets kicker Sam Ficken missed two extra points in his return from a groin injury that sidelined him for three games.