Aloha: Rams and Cowboys face off in Honolulu 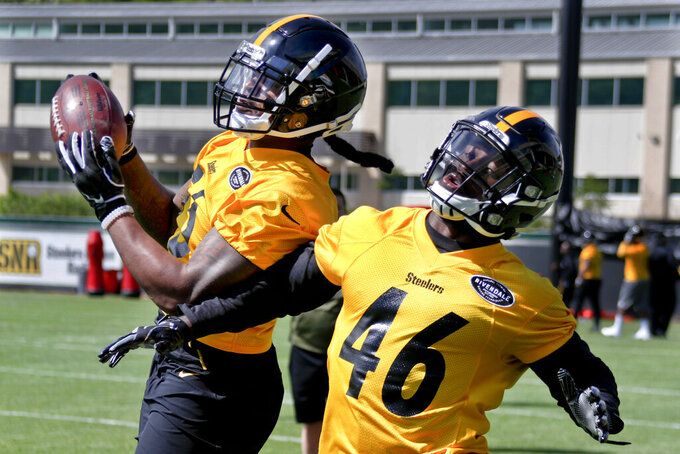 FILE - In this May 11, 2019, file photo, Pittsburgh Steelers linebacker Devin Bush, left, catches the ball during pass defense drills at NFL football practice in Pittsburgh. First-round pick Bush will get a chance to show his eye-opening debut _ when the inside linebacker made 10 tackles against Tampa Bay _ was a taste of things to come. (AP Photo/Keith Srakocic, File)

The Dallas Cowboys and Los Angeles Rams meet Saturday night in Honolulu, a place that used to be a regular NFL stop for the Pro Bowl.

Instead, Hawaiians will see lots of backups for both teams, who faced off in a playoff game in January won by LA on its way to the Super Bowl.

"Hawaii is a magical place," coach Jason Garrett said. "There is a great football tradition there, a lot of great players have come from there. One of our great players years ago, Mark Tuinei, is from Hawaii, and so many others. But once you get around the logistical part it's going to be fun to go over there and play a football game and hopefully grow as a team in a great environment."

The first exhibition game in Hawaii since 1976 also figures to be Cowboys tight end Jason Witten's return after a year in retirement as a broadcaster. The 11-time Pro Bowler is on the verge of setting a club record with a 16th season. The 37-year-old Witten already holds the Dallas records for catches and yards receiving and could threaten the mark for touchdowns receiving.

With two-time rushing champion Ezekiel Elliott about to miss his second preseason game in a holdout, rookie Tony Pollard should get a slightly longer look than he did in the opener at San Francisco. Playing just the first series against the 49ers, Pollard had four carries for 16 yards on a drive to a field goal. Alfred Morris, the primary replacement during Elliott's six-game suspension two years ago, could see his first action of the preseason after signing during training camp.

Many of the Rams' top players are not even making the trip to Hawaii. Coach Sean McVay intends to stick to his strategy of sitting out his key starters for the entire preseason.

After spending last week in Northern California ahead of a game in Oakland, the Rams are already a bit tired of life on the road again, so they're only spending about 48 hours total in Hawaii.

While Houston coach Bill O'Brien doesn't seem ready to play many starters, one of them who would like to get in Saturday's game, or at least one of the next three preseason contests. Receiver Will Fuller, a first-round pick in 2016, sustained a season-ending knee injury last October.

"I think I need to play in a preseason game because I haven't played a football game in a long time," he said. "So just being out there and feeling game speed again, getting hit again, I haven't gotten tackled yet, is important."

For the second straight week, the Lions will play a team after having joint practices with the opponent. Last week, New England was at the Lions' facility for practices and faced them in their preseason opener.

"Competing against the Patriots, competing against Houston, you really get three good sets of evaluation with different types of players," Detroit coach Matt Patricia said. "J.J. Watt is obviously a phenomenal player, as is everybody that's down there, so I think that it is a great opportunity."

Of course, Watt and those others "down there" likely won't play.

After two days of physical workouts and minor skirmishes, Cleveland and Indianapolis get together one more time.

Indy needs to see more productivity out of its offense. In last week's loss to Buffalo, the Colts managed only two first downs on their first seven possessions. Those problems reappeared during the joint practices and included slow starts by the offensive line on both days. Coach Frank Reich wants to see that corrected this weekend even as Andrew Luck continues sitting out to recover from calf and lower left leg injuries.

The Browns are expected to keep the bubble wrap on star receiver Odell Beckham Jr., who didn't play in the first exhibition and is dealing with a hip injury the team claims is minor.

Beckham's absence has given Rashard Higgins more reps and the receiver's development has been one of the team's most pleasant surprises this summer.

Quarterback Baker Mayfield is expected to get a few more snaps with the starting offense.

The Patriots have wideout woes.

Julian Edelman is still recovering from a thumb injury, and they also practiced without N'Keal Harry for a second straight day this week. Phillip Dorsett also watched with a wrap over his left thumb and hand after not being able to finish Wednesday's practice. And Maurice Harris didn't finish that practice and wasn't seen Thursday.

Not that it mattered to Tom Brady, who simply completed most of his passes to receivers such as undrafted rookie Gunner Olszewski of Bemidji State. And the standout thus far in camp has been undrafted WR Jakobi Meyers.

Three-time Pro Bowl tight end Delanie Walker is hoping to play for Tennessee after watching the Titans' preseason-opening win in Philadelphia. He sat out three straight practices before working against the Patriots on Thursday. The Titans also might get back rookie wide receiver A.J. Brown, who sat out for two weeks of training camp after hurting his left hamstring on the opening day of camp.

The Steelers will begin the painful process of moving on following the death of wide receivers coach Darryl Drake.

Drake's passing left the Steelers in mourning and the young group of receivers the 62-year-old led missing more than just a coach.

"It's hard to get back to the game you love because he's not out there telling you what to do, he's not out there yelling," Steelers receiver Ryan Switzer said. "So it's hard. But it's part of our profession, and it's something we have to do. And something that coach Drake would want us to do."

First-round pick Devin Bush will get a chance to show his eye-opening debut — when the inside linebacker made 10 tackles against Tampa Bay — was a taste of things to come.

The Chiefs head to Pittsburgh with quarterback Patrick Mahomes and the rest of their starters expected to play most of the first half. That includes a number of guys who have missed practice this week with an illness, such as wide receiver Sammy Watkins and defensive end Frank Clark.

Newly signed cornerback Morris Claiborne could also get on the field for the first time with Kansas City, even though he will be suspended the first four games of the regular season for violating the NFL's substance abuse policy.

"We've got some things we have to fix," Jordan said. "I'm always going to put it on the front D-line when we don't generate enough pass rush. I'd say it's concerning, but at the same time, that's why you have a preseason game to tune everything up."

While Jordan could see his first preseason action, more attention is on how much progress fellow end and 2018 first-round draft choice Marcus Davenport is making. He struggled to create pressure on Vikings QBs last week in a 34-25 loss.

"He's got a lot of things he wants to do, mentally," Jordan said of Davenport. "So, I try to tell him sometimes it's not about thinking so much. It's about just going out there and physically performing."

Philip Rivers will be held out for the second straight game as Chargers coach Anthony Lynn continues to get the backups and young players more snaps. Rivers said he would be fine with not playing in a preseason game, which is a pretty stunning admission from him; he likes getting in as much work as possible.

Tyrod Taylor will get the start followed by Cardale Jones and rookie Easton Stick.

Adrian Phillips will get a lot of snaps at free safety now that Derwin James (foot) is injured.

After playing the starters one series in their opening win at New Orleans, the Vikings will probably give the first-team offense a longer look as quarterback Kirk Cousins continues to settle in to the revamped scheme under coordinator Kevin Stefanski and adviser Gary Kubiak. Running back Dalvin Cook, entering his third year after two injury-shortened seasons, was held out against the Saints as a precaution. Rookie Alexander Mattison is the leading candidate to be the No. 2 running back and will get plenty of action against the Seahawks.

The most intriguing player in purple will undoubtedly be specialist Kaare Vedvik, the recent acquisition from Baltimore who is being evaluated equally as both a kicker and a punter. Though it's unlikely Vedvik, a native of Norway in his second year in the league out of Marshall, would be given both jobs for the regular season, he'll get a chance to kick and punt in the remaining exhibition games.

Russell Wilson likely will see the field for the first time and will give the first true look at his connection with rookie wide receiver DK Metcalf that has shown promise during training camp. Running backs Chris Carson and Rashaad Penny — leaders of the top running attack in the NFL last season — are also likely to get some carries.

Defensively the focus will be on Seattle's pass rush that remains the biggest question heading into the season.

San Francisco quarterback Jimmy Garoppolo is expected to get his first game action since going down with a season-ending knee injury last September. Garoppolo sat out the first exhibition game, but is expected to play at least a series at Denver. The Niners are counting on big things this season from Garoppolo, who has made only 10 starts in five NFL seasons.

Broncos WR Emmanuel Sanders is expected to make his first start since tearing his left Achilles tendon in practice last December. Sanders revealed recently that in addition to that injury, he had "tightrope" surgery on his right ankle (which is being used in athletes now to speed the recovery from high ankle sprains).

The Broncos are hoping to finally have their starting O-line together in a game. LT Garett Bolles, LG Dalton Risner and C Connor McGovern have all played, but health concerns have limited RG Ronald Leary and RT Ja'Wuan James. The Broncos need this group to show marked improvement and keep Joe Flacco upright for them to have any chance of returning to respectability in 2019.