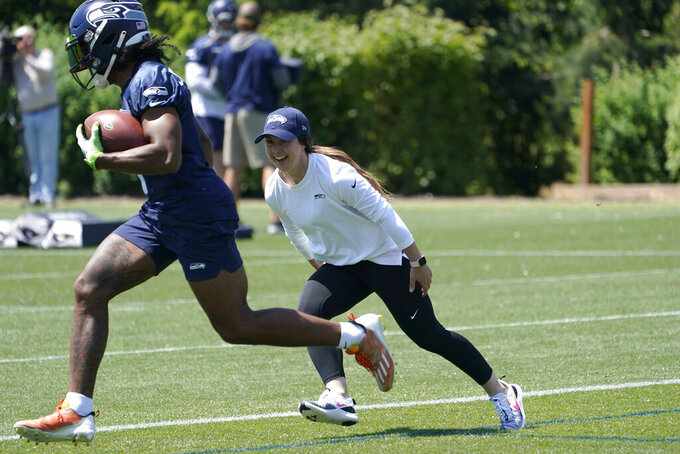 Amanda Ruller, who is currently working as an assistant running backs coach for the NFL football Seattle Seahawks through the league's Bill Walsh Diversity Fellowship program, runs a drill with wide receiver Dee Eskridge during NFL football practice on May 31, 2022, in Renton, Wash. Ruller's job is scheduled to run through the Seahawks' second preseason game in August. (AP Photo/Ted S. Warren)

RENTON, Wash. (AP) — Amanda Ruller’s list of accomplishments is a long one, and potentially humbling for anyone talking with her.

Oh, and she once won a car on the “Price Is Right.”

“I think everything that I tried kind of put me in the next direction, the next step,” Ruller said. “And every time I look back, I’m like, ‘Oh my gosh, every time I tried something new, I met somebody else that pointed me in a new direction.’ And it’s not that I failed at everything. I just think it brought me to this moment."

Ruller's current moment is taking place on an NFL field as an assistant running backs coach for the Seattle Seahawks. She joined the Seahawks in late May through the league’s Bill Walsh Diversity Fellowship program and will stay on staff through their second preseason game in August.

After that, Ruller is hoping there may be an opportunity to stay in the NFL. Otherwise, she’ll go back to her job as the running backs coach at McMaster University in Hamilton, Ontario, where she's one of two women on the coaching staff along with wide receivers coach Taylor MacIntyre.

“I would love to make this home. I am quite fond of the area. I love the staff and the culture. I can’t speak enough good things about them,” Ruller said. “So I just think that there’s more opportunity for me to work with in here. But if that’s (not) the case, I’ll go back to McMaster and still cut my teeth in football there."

Ruller is one of several women participating in the Walsh fellowship this year.

Mickey Grace had her second stint in the program working with the Atlanta Falcons last month. Grace is the assistant wide receivers coach at UConn. Joan Cantanese, a high school football assistant in Louisiana, will also work with the Falcons in training camp.

Isabel Diaz landed a spot in Washington after getting to know Commanders coach Ron Rivera during an NFL women's forum. She is working with the secondary.

Teams had until this week to submit their fellowship list to the NFL so the final number of women participating is not known yet. NFL senior manager of football programming Venessa Hutchinson estimated it would be close to last year when six took part.

“I think that number is going to continue to grow,” Hutchinson said. “I think one of the best parts about it is there is this media coverage toward women when they are participants in the Bill Walsh program. And it creates an awareness for other women who either want to coach or are currently coaching at some lower level, that kind of lets them know that this is an opportunity that they can have.”

Locust, Brownson and King all participated in the fellowship.

Seattle is among the teams that will have women participating through the fellowship for the first time this season.

Ruller’s journey to coaching started when she attended Saskatchewan Roughriders games as a child. She went on to set records as a sprinter at the University of Regina, which prompted an invitation from the Canadian sliding team and a chance to compete in bobsled and skeleton.

But her heart was always in football. Ruller played for Team Canada and in an indoor league for women in the U.S. Once she was done playing, coaching became her goal.

Earlier this year, Ruller was selected to participate in the CFL’s Women In Football initiative and spent time as a coach with the Roughriders during their training camp.

Ruller’s break with the NFL came through her own initiative. She went to the NFL combine in Indianapolis this year to meet with as many teams and personnel as possible. It's where she connected with the Seahawks.

“I kept pushing and pushing, and inserting myself. I got cut from my first football team. I showed up anyway. I kept making it happen for me and I never took no for an answer," Ruller said. “And from there I gained a passion for the sport because it actually challenges me and it stimulates me every single day to get better.”