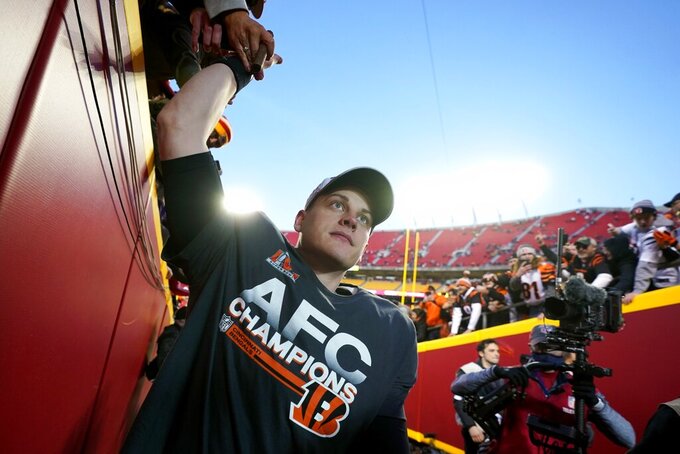 The Cincinnati Bengals were downright dreadful at this time two years ago.

They were the worst team in the NFL, coming off a 2-14 season with a first-year head coach and facing the franchise-shaping decision of who to take with the No. 1 overall pick in the draft.

The Bengals have put those dark days far behind them. Led by coach Zac Taylor, quarterback Joe Burrow and a roster of promising young talent mixed with savvy veterans, the franchise — not-so-affectionately called the “Bungles” for decades — is playing in the Super Bowl for the first time in 33 years.

“I think if you would’ve told me coming into the league, when I got drafted, that we would be here this year, it would be a shock," said Burrow, the top pick in 2020. “Now, I’m not surprised."

Even if some outside the organization still are.

“We believed from the get-go,” Taylor said after the Bengals' 27-24 overtime win at Kansas City in the AFC championship game. “Whether people believed in us or not, we did.”

In fairness to the skeptics, changing the narrative in the NFL comes through consistent results over time.

If you win Super Bowl titles or are regularly in position to play deep into the postseason, your franchise is viewed as successful. But if you're often already looking to the draft and the next season by November, you're labeled lowly losers.

The latter is the case for the New York Jets, who have the league's longest active playoff drought at 11 seasons. And for the Jacksonville Jaguars, picking No. 1 overall for the second straight year. And teams such as the Giants, Detroit Lions, Houston Texans and Miami Dolphins — franchises in flux for much of the past few years.

But somewhere in the misery of all that losing, the Bengals provide hope and, more importantly, a model for how things can turn around quickly and what it takes to pull it off. It's far from easy, though: Cincinnati is only the third team to go from the NFL's worst record to the Super Bowl in a span of two years, joining the 2003 Carolina Panthers and 1981 San Francisco 49ers.

"There is a blueprint,” Jets coach Robert Saleh told reporters last week at the Senior Bowl in Mobile, Alabama. "When you develop within, you draft well, you select the right free agents and you build a culture that you believe in and you stay with continuity and you don’t fall into peer pressure with whatever Cincinnati has had to endure over the last couple of years, you end up reaping the benefits of your patience.”

The Bengals and their fans certainly are a case study in handling frustration.

Cincinnati was mired in mediocrity for so long, the team's previous trip to the Super Bowl in 1989 seemed like fairy tale stuff. Taylor, who's 38 now, was in elementary school then. The Bengals' most recent playoff win until this season came 31 years ago.

A whole new generation of fans was born, grew up and suffered plenty in that time.

Sure, there was a promising stretch under Marvin Lewis from 2009-15 when Cincinnati made the postseason in six out of seven seasons, including five in a row, but the Bengals never won a playoff game.

Next came three losing seasons under Lewis and then a coaching change. Owner and general manager Mike Brown looked to Sean McVay's coaching staff with the Los Angeles Rams — who the Bengals will play next Sunday — and brought in Taylor to lead a turnaround.

Taylor's rough 2-14 first season was followed by the drafting of Burrow, whose rookie campaign was cut short by a knee injury in Week 11. The Bengals finished 4-11-1 — last in the AFC North for the third straight year.

Not this time. Cincinnati has been building a solid foundation, starting with the coach and quarterback, and supported by an influx of draft picks and free agents who have been key starters.

— Wide receiver Ja'Marr Chase was reunited with his LSU quarterback when he went in the first round last April. Kicker Evan McPherson was taken in the fifth, a move that drew some criticism but now looks genius with his 12-for-12 postseason on field goals. Defensive end Trey Hendrickson, and cornerbacks Chidobe Awuzie, Eli Apple and Mike Hilton — all starters — were among the free agent haul.

Adding those players to a core that included homegrown vets such as running back Joe Mixon, wide receiver Tyler Boyd, tight end C.J. Uzomah, defensive end Sam Hubbard and safety Jessie Bates has turned out to be a winning mix.

“We have a team that’s likable," Brown said in a story posted on the Bengals' website. “It’s a young team that plays exciting football.”

Getting it all right isn't easy, as the Jets, Jaguars, Giants, Lions, Texans and Dolphins — among others — can attest.

But the Bengals have proven it can be done correctly and quickly. Even if a two-year turnaround like Cincinnati's might be unrealistically fast.

“This is what you work so hard for,” Burrow said. "We didn’t go into last season saying that we have to have a great offseason to make it to the Super Bowl next year. I think everyone just went into it and knew they had to get better as players so we could be better as a team.”

And this might just be the start of something special — with sustained success — for the Bengals.

“It’s a great run for us,” Brown said. “Everyone in Cincinnati is hoping it continues.”

By Pat Graham 2 hrs ago
By Arnie Stapleton 5 hrs ago
By W.g. Ramirez 8 hrs ago
By Brett Martel 10 hrs ago
By Dan Greenspan 11 hrs ago