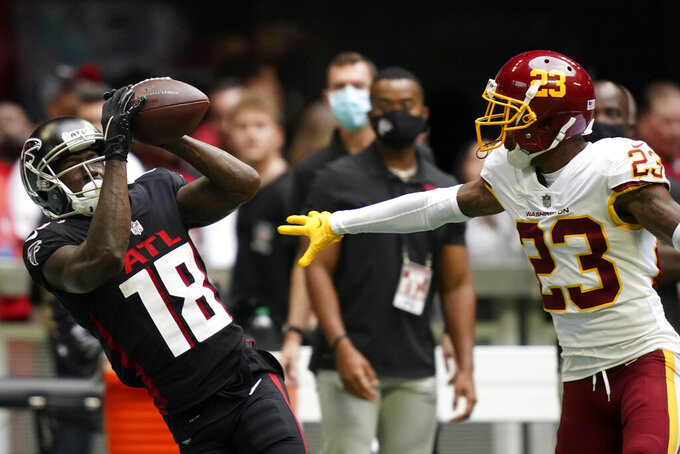 Calvin Ridley and Lane Johnson are speaking up in their fight against an opponent tougher than anyone or anything they’ve ever battled on a football field.

On a day Ridley said he’s stepping away from the Atlanta Falcons to deal with mental health issues, Johnson opened up about his struggles with anxiety that caused him to miss three games for the Philadelphia Eagles.

Their courage will encourage others to seek help for similar issues.

Ridley, the team’s No. 1 wide receiver, was a last-minute scratch Sunday against Carolina. It was the second game that Ridley has missed this season for what the team described as a personal matter.

Ridley explained it on social media during Atlanta’s 19-13 loss.

“These past few weeks have been very challenging and as much as I’d like to be on the field competing with my teammates, I need to step away from football at this time and focus on my mental wellbeing,” Ridley wrote on his Twitter page.

Johnson, a three-time Pro Bowl right tackle, left the Eagles for “personal reasons” shortly before a home game against Kansas City on Oct. 3. He returned last week and spoke to reporters for the first time following a 44-6 win at Detroit.

“Football wasn’t even a question at the time,” Johnson said, revealing he was experiencing withdrawal symptoms after he stopped taking an antidepressant medication. “I told a few close friends but really kept it bottled up because I felt ashamed of it. I felt like it was a crutch. But coming back, the support I’ve had from the team, from my friends, from my family, I couldn’t ask for nothing better. And getting out here and playing football again, you’re reminded how lucky you are to be in the position that you are in. So, taking it day by day.”

Other NFL stars have stepped up in recent years to break the stigma associated with mental wellness, making the topic no longer taboo in a violent sport filled with false bravado and macho attitudes.

The league debuted an initiative earlier this year featuring current players promoting mental health in a series of videos and public service announcements.

Early in his career, Hall of Fame safety Brian Dawkins overcame a drinking problem that spiraled into a depression and made him feel like ending his life was the only way out. His mission since retiring has been to use his platform to educate people about “cerebral wellness” and inspire those dealing with any issues.

“There’s so much negative connotation still attached to mental health,” Dawkins said recently on the AP Pro Football Podcast. “You were taught to suck it up, stay tough but you’re hurting yourself in the long run. ... We’re trying to mask the pain by drinking too much or doing drugs and that’s all because we’re trying to suck it up and deal with it ourselves. We all need someone to talk to and that’s what I’ve come to understand now.”

Brandon Marshall, who caught 970 passes for 12,351 yards and 83 touchdowns, owns an NFL record with 21 receptions in one game and played in six Pro Bowls, told the AP his proudest accomplishment came when he sought help for mental illness.

“It helped me actually just become better in so many other areas of my life and inspired me to build things that could help people be better,” Marshall said.