Analysis: No offense but 2022 NFL is no league for old men 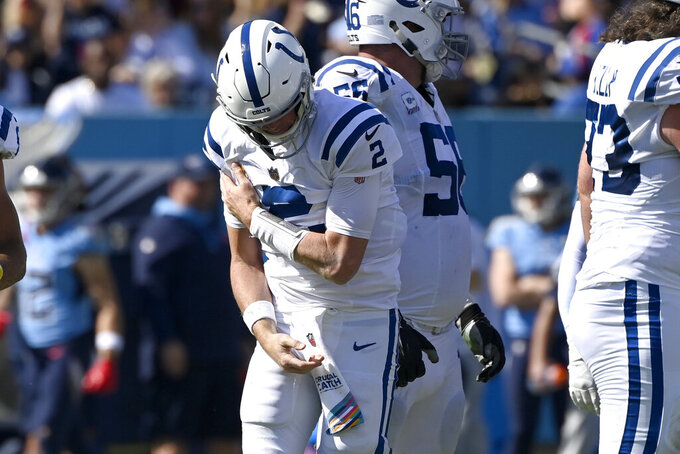 Indianapolis Colts quarterback Matt Ryan holds his shoulder after being sacked during the first half of an NFL football game against the Indianapolis Colts Sunday, Oct. 23, 2022, in Nashville, Tenn. (AP Photo/Mark Zaleski)

DENVER (AP) — Defenses have finally figured out how to keep all those high-powered offenses from lighting up NFL scoreboards, and they're also showing that in 2022 this is no league for old men.

Tom Brady, whose unretirement at age 45 is looking like a big mistake, was held without a touchdown throw Sunday by a woeful Carolina Panthers team that throttled the Tampa Bay Buccaneers 21-3 after trading its best player and starting a third-string quarterback.

Aaron Rodgers, 38, was held without so much as a third-down conversion — or one on fourth down, for that matter — for the first time in his career in the Green Bay Packers' 23-21 loss to Washington and Taylor Heinicke.

Russell Wilson, sidelined by a pulled hamstring, donned a headset instead of a helmet in Denver, where the offensively-challenged Broncos lost another close one Sunday with backup Brett Rypien making his second career start against the Jets.

Nathaniel Hackett said afterward that Wilson was trending toward returning against the Jaguars in London next weekend, although it might be best for the 33-year-old QB who's off to the worst start of his career to sit out until after the Broncos' bye and return against the Titans on Nov. 13.

There's a multitude of reasons for the quarterbacks' struggles and the league-wide dip in point production so far, including more blitzes and a rash of elite receivers getting traded, leaving their former teams to recreate chemistry, which takes time.

A major factor is the explosion of shell coverages where players cover portions of the field to form a “shell” defense, a strategy popularized by former Broncos coach Vic Fangio that is menacing offensive play-callers and ruffling quarterbacks this season, especially in the red zone.

Some of the game's most accomplished QBs are really feeling the pinch.

Brady doesn't look like a seven-time Super Bowl winner without retired sidekick Rob Gronkowski, and Rodgers doesn't look like the league's two-time reigning MVP without pal Davante Adams, who was traded to the Raiders in the offseason.

Mahomes already has thrown for 20 touchdowns, putting him on pace for 48, just shy of the 50 he threw his first season as a starter in 2018. He's averaged 34 TDs over the last three seasons, all with Hill, who asked out of Kansas City in the offseason and was dealt to the Dolphins.

With 11 TDs through seven weeks, Rodgers is on pace for half about half of Mahomes' projectied TD total — 26 — after throwing for 37 last year and 48 the year before.

Counting playoffs, Brady had 96 TD throws his first two seasons in Tampa, mirroring Peyton Manning's renaissance in Denver in the second chapter of his Hall of Fame career. But he has just eight through seven games this season, putting him on pace for 19.

That would be his lowest in a healthy season since his first year as the Patriots' starter in 2001, when he had 18 TDs.

Like Brady's Bucs, the Packers are 3-4 following three straight years of Rodgers going 13-3.

Their common struggles have led to both scuffling superstars dressing down teammates over dropped passes or missed assignments.

At least they'll get the chance to turn things around. Ryan won't, even though he the Colts took on the more than $50 million remaining on his salary when they acquired him from Atlanta in the offseason.

Nowhere is the league's tilt toward defense more pronounced than in Denver, where the Broncos are giving up just 16.4 points a game but are 2-5 because their odious offense is averaging just 14.3 points per game.

That has Denver fans wondering if they didn't get themselves a lemon in Wilson, who cost the Broncos three players and four high draft picks plus a $245 million extension before the season.

Wilson's five TD throws in six games puts him on pace for 13 this season, a year after he threw for 25 touchdowns and two years after he had a career-best 40 in Seattle.

His struggles in Hackett's hybrid offense come just months after the Walton-Penner ownership group paid a global sports record $4.65 billion for the team but have seen thousands of empty seats at Empower Field and thousands of fans streaming for the exits in crunch time to beat the traffic rather than watch the Broncos fall short again.

Hackett is on the hot seat just two months into his rookie season as head coach and general manager George Paton might be getting sweaty himself.

“When your defense is playing as well as our defense is you shouldn't be losing games. That's just point blank, period, a fact,” Rypien said after the Broncos' 16-9 loss to the Jets Sunday that gave them five losses by an average of 4.6 points.

“We have to figure out what we can do to turn this thing around,” said Rypien, echoing Brady in Tampa, Rodgers in Green Bay and Reich in Indianapolis as their teams stumble toward the season's halfway point with unenviable records, sputtering offenses and few, if any, answers.