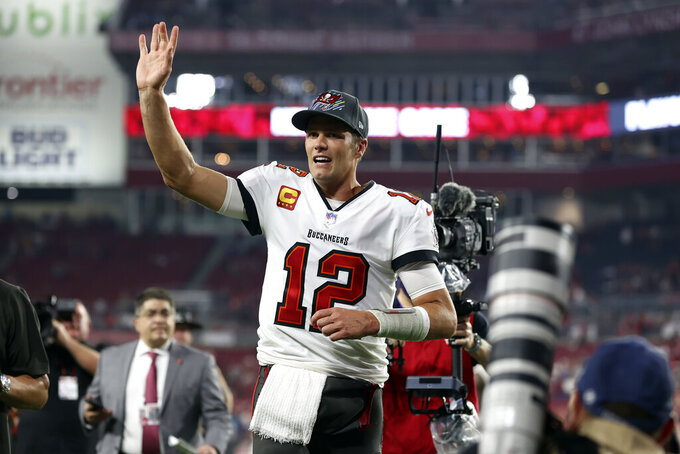 TAMPA, Fla. (AP) — Despite winning an unprecedented seven Super Bowl rings, Tom Brady is still haunted by one that slipped away — literally.

As Brady and the Tampa Bay Buccaneers (13-4) prepare to host the Philadelphia Eagles (9-8) in an NFC wild-card game Sunday, the GOAT has been forced to recall his big drop. It occurred in Philadelphia’s 41-33 win over New England in the Super Bowl four years ago when Brady let a pass from wide receiver Danny Amendola bounce off his fingertips.

Making matters worse, Eagles quarterback Nick Foles caught a touchdown pass later in the game on a trick play called “Philly! Philly!” that will be immortalized in Philadelphia.

“Every time I see an Eagles fan I get reminded of that play,” Brady said on his SiriusXM podcast this week.

Eagles fans also have an unhealthy obsession with Brady running off the field after that loss and not shaking Foles’ hand. That happened again when Brady and the Bucs lost to Foles and the Chicago Bears in 2020. For all his success, Brady can be a sore loser at times.

Eagles fans won’t let him forget when he isn’t. They don’t win many championships in Philly, so they have to settle for small victories.

The city’s prickly attitude rubbed off on Eagles quarterback Jalen Hurts this week. The normally pleasant Hurts, who will make his first career playoff start compared to Brady’s 46th, was in no mood to talk about his counterpart.

Asked for his first memory watching the 44-year-old Brady play in the NFL, the 23-year-old Hurts sniped: “I don’t remember.”

Hurts was 6 years old when Brady led the Patriots to a 24-21 win over Donovan McNabb, Terrell Owens and the Eagles to capture his third Super Bowl title following the 2004 season. No team has repeated as champions since that victory. Brady and the Bucs aim to end that streak. First, they have to get through the Eagles.

This will be Brady’s third time facing Philadelphia in the postseason. While the first two were Super Bowls, this also is a do-or-die game.

The Buccaneers and Eagles are no strangers in the postseason, either. They’ve split four meetings.

The previous one evokes bitter memories for Eagles fans. The Buccaneers closed out old Veterans Stadium with a 27-10 victory in the NFC championship game on Jan. 19, 2003. It was the first time in franchise history that Tampa had won a game in temperatures under 30 degrees. Ronde Barber sealed the win with a 92-yard pick-6 off McNabb with 3:12 left in the game.

Tampa, led by coach Jon Gruden and quarterback Brad Johnson, went on to beat the Raiders in the Super Bowl, then didn’t win another playoff game until Brady arrived last season.

Before that, the Eagles beat the Buccaneers in wild-card games in each of the previous two seasons. A 31-9 win over Tampa on Jan. 12, 2002, ended coach Tony Dungy’s tenure with the Buccaneers. Dungy ended up going to Indianapolis where he teamed with Peyton Manning to win a Super Bowl, and eventually made the Pro Football Hall of Fame.

The Bucs beat the Eagles 24-17 on Dec. 29, 1979, in the divisional round in their first playoff game in their fourth season. Doug Williams threw just 15 passes in that game as Ricky Bell ran for 142 yards on 38 carries.

Brady might throw that many passes in the first quarter alone this week. He led the NFL in several statistical categories, including 5,316 yards passing, 43 TDs, 485 completions, and 719 attempts.

All he needs is a victory no matter how the Bucs earn it to erase the sting of that dropped pass and the Super Bowl 52 loss.