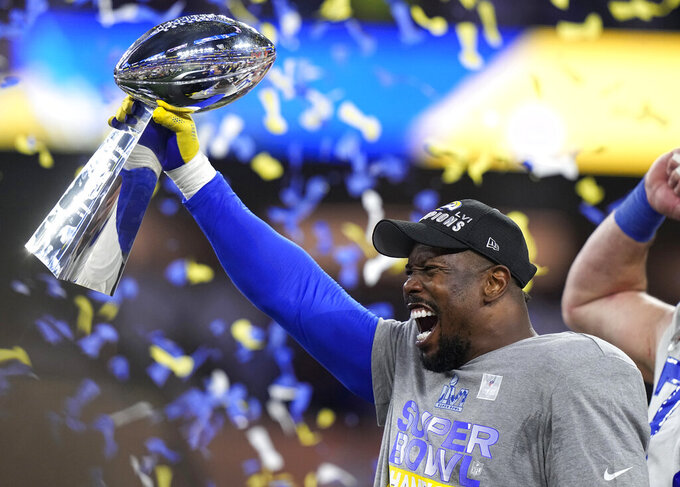 When the Los Angeles Rams acquired Von Miller on Nov. 1, they tweeted, “We’re all in,” along with a GIF of John Malkovich splashing the poker pot.

With Miller adding an emotional boost, a veteran's savvy and a physical presence that helped Aaron Donald go from all-time great to Super Bowl champion, the Rams rule the NFL for the first time since 2000, when they still played in team owner Stan Kroenke's native Missouri.

Kroenke treats his NFL team the way he used to treat his NBA team: with a willingness bordering on an eagerness to mortgage the future for a shot at winning it all right now.

It wasn't a winning formula for the Denver Nuggets, but it worked with the Rams, who traded a slew of high draft picks to acquire the likes of Jalen Ramsey, Matt Stafford and Miller in the five years since Sean McVay became the youngest coach in the league.

The Rams haven’t had a first-round pick since selecting Jared Goff No. 1 overall in 2016, and they don’t own another one until 2024.

And their winning bet might end up costing them big time.

It'll be hard for them to keep the likes of Miller, a pending free agent who saw himself as a hired hand, safety Eric Weddle, who said he'll re-retire, Odell Beckham Jr., who suffered a serious knee injury Sunday, and Andrew Whitworth, who says his status as the game's oldest player — which he acquired when Tom Brady retired — will be short-lived.

The Rams can withstand their departures, but losing Donald and McVay to early retirements would be back-breakers.

Sticking to the poker theme, worries that a bad beat might be coming for the all-in Rams heightened almost as soon as the confetti cannons fired Sunday night following Donald's takedown of Joe Burrow on the Bengals' final snap that sealed the Rams' 23-20 win over Cincinnati.

Donald was asked in the midst of his championship celebration whether he was going to retire now that he'd finally filled the one gaping hole in his Hall of Fame-worthy resume.

Just like he did to the linemen who tried to block his path to Burrow in the second half, Donald deftly sidestepped questions about an early retirement, saying he just wanted to enjoy the moment and consider his future later.

Same with McVay, who's just 36, but already has spoken about an early exit from the coaching profession.

Just 48 hours before his second Super Bowl appearance in his five seasons in L.A., McVay was asked if he saw himself as an NFL lifer like Bruce Arians, Andy Reid and Bill Belichick, the three previous Super Bowl-winning coaches, who are all in their 60s.

McVay is getting married this summer and said he wants to start a family “and I want to be able to spend time with them.”

McVay's father, Tim McVay, grew up in a football family whose patriarch, John McVay, was a coach with the Giants and then a highly successful front office executive with the 49ers.

“My dad, I think, would’ve been an unbelievable coach," Sean McVay said. “He’s been one of the best leaders I’ve ever been around. He’s had a huge impact on me."

And one of the greatest lessons he imparted on his son was putting family first.

A day after becoming the youngest NFL head coach to win a Super Bowl, Sean McVay said nothing about the possibility of walking away anytime soon and he didn't sound like a man ready to walk away from the gridiron and into the broadcast booth, as many suspect he will eventually do.

Rams chief operating officer Kevin Demoff said the team will wait until its celebrations die down to figure out how serious McVay and Donald are about starting life after football, but he is optimistic they’ll both be back.

“I think all of these guys are wiped,” Demoff said. “When you get to this point, the gas tank is empty and you’re sitting there holding a trophy. I think that’s daunting to some degree when you wake up this morning and realize you’ve got to go do it all over again, and you don’t have the energy. So I think the talk is actually natural.

“And I would agree. I don’t think Sean’s current pace is sustainable in terms of how much work he puts in if you want to have a family. But I think the one thing, these guys all love football. They love being around each other. ... These are all natural questions that are hard to answer in the moment. A month away, two months away from everybody, and I think things will feel a lot better.”

And maybe their heart and soul will be back to help defend the title they just won by going all-in.