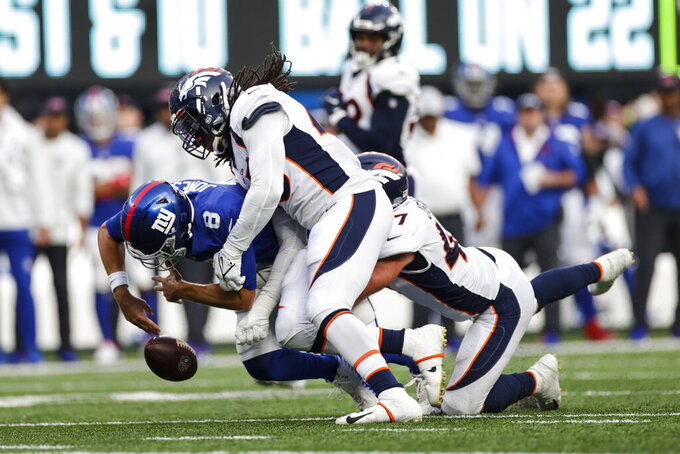 New York Giants quarterback Daniel Jones (8) fumbles the ball as Denver Broncos' A.J. Johnson (45) tackles him during the second half of an NFL football game Sunday, Sept. 12, 2021, in East Rutherford, N.J. The Broncos recovered the ball on the play. The Broncos won 27-13. (AP Photo/Adam Hunger)

So it's the day after an NFL game. Or the day before. Or the morning of.

And there are the coaches, reminding players about how damaging giveaways can be and how rewarding takeaways are. Call it the Turnover Topic.

“That ticked me off. I hate fumbles,” Jackson said after his bobble in overtime helped Las Vegas to victory. “I hate any type of turnover.”

Don't bother bringing it up to the likes of John Harbaugh and other pro coaches. They never stop harping on it.

“We just didn’t close the game out when we had the opportunity to do it, three or four times,” Ravens coach Harbaugh said. "You know, that is what you need to do. When you have an opportunity to win, you got to go win it, and we just didn’t do it tonight.”

Nor did the Browns, despite outplaying the Chiefs in Kansas City for much of the opener. Mayfield's pick was the final clinching blow.

“It’s critical situations,” said Mayfield said. “Those are the moments where you look back and everybody’s going to remember that last play and that can be the difference. No matter what has happened previously, you can throw all of that out the window as long as you have a chance and whoever has the ball last, if you can make a play those are the ones that matter.”

When turnovers become more than annoying is if they are chronic. Mayfield, despite his advancements, leads the league with 16 fourth-quarter interceptions since 2018.

When Ronald Jones fumbled in the kickoff game last week for Tampa Bay against Dallas, he pretty much disappeared for the rest of the night. The explanation later on from coach Bruce Arians was stark, an inside look at how damaging turnovers can be to a player's psyche.

Pat Kirwan, who has scouted, coached and been an NFL team executive, noticed.

“We don’t hear that kind of comment from many coaches,” said Kirwan, a SiriusXM NFL Radio host and analyst. “How many coaches have we ever heard say, ‘Yeah, he didn’t play much after that because he couldn’t handle it mentally.’ That to me is an indictment of a guy and I think it is a warning sign to the player from the coach: ‘We are not going to have much more than that.’

“You start in the tank business on the sideline. ... It is easy to say forget the play and go on to the next player, but if you can't do that emotionally, you won’t be there for long. That was so strong a statement about a professional football. It happens, a lot more than people think, but you never hear it. If coaches start to detect that problem they start to lose trust in the player that I can count on you on game day.”

Most of the players who were in giving mode in Week 1 won't be benched. They'll be bugged and berated about protecting the ball. If they don't learn, well, then there's a problem that can curtail careers.

On the other side, eager defenders look to rip out the football from the ball carrier. Or jump a route for an interception. There are drills in practice that can be dedicated to exactly that. Nothing makes a defensive player's day more than a strip-sack or a pick or a fumble recovery.

But there's a danger to harping on the negative, according to Browns special teams coordinator Mike Priefer. He saw punter Jamie Gillan drop a snap, then panic late in the loss at Kansas City.

“I don’t like to practice failure,” Priefer said. “I’m being serious, like a fire call on a field goal. We muff a field goal snap, we talk about it, we might walk through it, but we never want to actually practice that exact situation because to me if you’re practicing a dropped snap, you’re practicing failure.

“Do we talk about those things? Of course, and we cover the different situations.”

Of course, unusual situations always seem to crop up in NFL games. The stats don't always support the circumstances, either.

Consider all those interceptions that go on a quarterback's ledger when a well-thrown ball deflects off a receiver; the Raiders were victimized by that in overtime against Baltimore, only to profit moments later on Jackson's fumble. Also think about bad snaps by centers that go down as giveaways by QBs. Run-pass option plays when it's not clear who is at fault.

Regardless, the turnover arguably (and not very arguably) is the second-most important occurrence behind a touchdown. For defenses, it's a turn-on. For offenses, it's time to turn away in disgust.