Off and running: Browns RB Chubb poised for breakout season 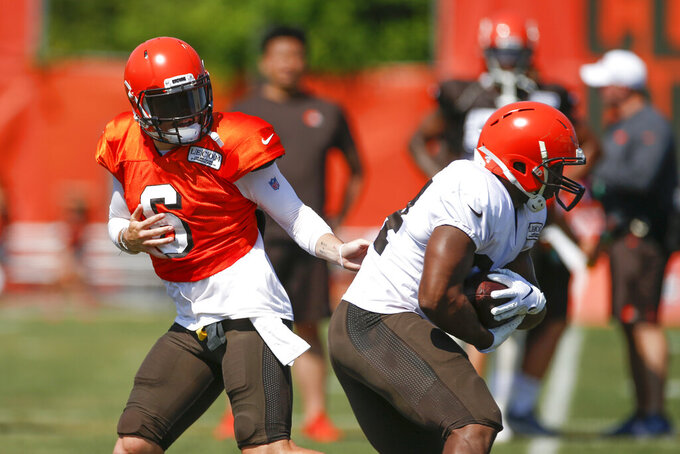 FILE - In this Aug. 5, 2019, file photo, Cleveland Browns quarterback Baker Mayfield (6) hands off to running back Nick Chubb (24) during practice at the NFL football team's training facility, in Berea, Ohio. Despite an embarrassment of offensive weapons, including Baker Mayfield and Odell Beckham Jr., Browns coach Freddie Kitchens made it clear his team won’t be “pass happy” this season. Not as long as he’s got Nick Chubb, who ran for 996 yards as a rookie and could be on the verge of becoming one of the NFL’s top backs. (AP Photo/Ron Schwane, File)

BEREA, Ohio (AP) — Nick Chubb skipped the parties in college. Not his style.

He was reserved and quiet at Georgia, keeping to himself or working out in the Bulldogs' weight room. The soft-spoken kid from historic Chubbtown was courteous and driven off the field, tough and powerful on it.

Browns coach Freddie Kitchens had friends who coached Chubb and who say he hasn't changed.

"He's the same guy as he was when he showed up as a freshman," Kitchens said. "He is just bigger, faster and stronger now."

And becoming one of the NFL's best backs.

After rushing for 996 yards as a rookie, Chubb could be on the verge of a breakout season with the high-flying Browns, whose offense won't simply consist of quarterback Baker Mayfield dropping back and rifling passes to either Odell Beckham Jr. or Jarvis Landry.

Not with Chubb around.

"I will just go ahead and put it bluntly to you," Kitchens said. "We will not be a pass-happy team. We will do what we need to do to win the game or attempt to win the game. We are going to run the football."

Chubb will carry the load.

A second-round pick in 2018, the 23-year-old Chubb started slowly last season. He played behind Carlos Hyde and was given the ball just 16 times in his first six games before getting his first start in Week 7 and rushing for 80 yards on 18 tries against Tennessee. But after coach Hue Jackson was fired and Kitchens got promoted from running backs coach to offensive coordinator, Chubb became the Browns' workhorse.

Chubb posted three 100-yard games in the final seven weeks and became the first Browns player since 1975 to score a rushing TD in five straight games. He ripped off a club-record 92-yard scoring run in a win over Atlanta, his gallop made more famous by Browns radio announcer Jim Donovan's "Chubba-Wubba-Hub" call.

Chubb, who overcame a serious left knee injury at Georgia, was in line to eclipse 1,000 yards and actually broke the milestone in the season finale at Baltimore only to be tackled for a loss on his final attempt and finish 4 yards short.

While some players would be devastated by the near-miss, Chubb took it in stride.

Chubb enters this season as Cleveland's primary back, a role he may wind up sharing later in the year once Kareem Hunt serves his eight-game suspension.

The duo of Chubb and Hunt, the league's rushing champion as a rookie in 2017 for Kansas City, could be tops in the league.

"It's going to be scary," Chubb said.

Hunt says his teammate is special.

Kitchens won't have any qualms about the Browns pounding opponents with handoffs to Chubb, who averaged 5.2 yards per attempt in 2018.

The idea is to win. If that means Chubb has to carry it 30 times, so be it.

"I'm just doing what I gotta do," he said. "You hand me the ball, our O-line does a great job blocking for me. If we want to pass the ball, maybe to block for them and catch some routes, too. Whatever the team needs."

That unselfishness is one of the many characteristics Kitchens admires in Chubb.

"Nick works his tail off every time he crosses the white line."

Chubb could soon work himself into the company of Ezekiel Elliott, Todd Gurley and the league's elite backs. But that's not one of his goals.

NOTES: Kitchens hasn't decided which starters will play — or for how long — in Thursday's exhibition opener against Washington. ... Cleveland's front defensive four were sidelined for the second day in a row. ... The Browns practiced in pads for the ninth consecutive day. ... In the kicking battle, Greg Joseph made 3 of 5 field-goal attempts during the kicking period and ended practice making a 45-yarder. Rookie Austin Seibert went 4 of 5, missing from 50. ... S Jermaine Whitehead made a leaping interception of Mayfield as the offense worked in situations backed up to its goal line.