Ankle keeps Giants RB Barkley out for Vikings on Sunday 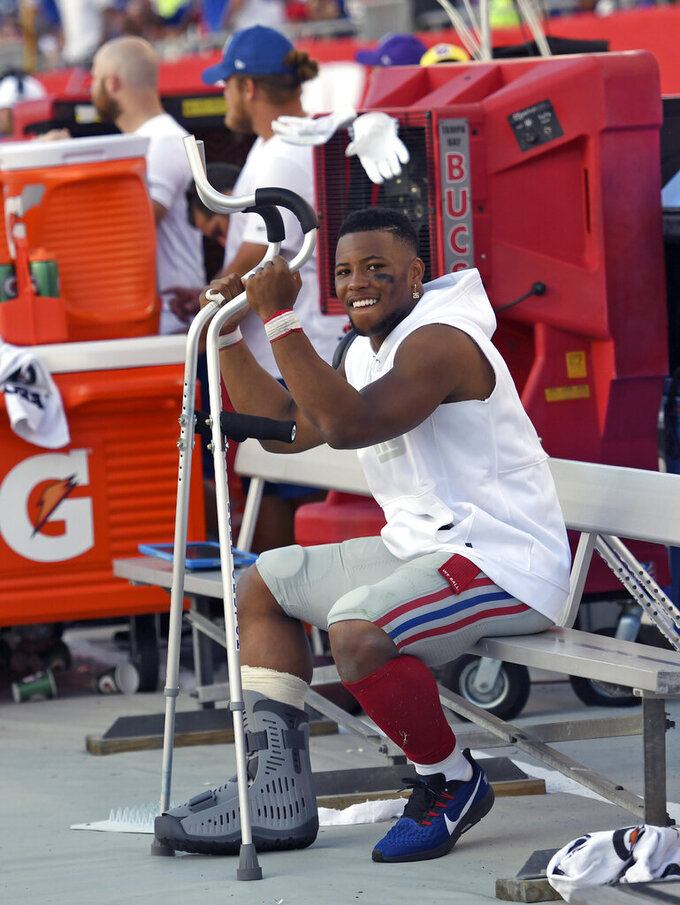 New York Giants running back Saquon Barkley smiles as he sits on the bench during the second half of an NFL football game against the Tampa Bay Buccaneers Sunday, Sept. 22, 2019, in Tampa, Fla. Barkley was injured in the first half. (AP Photo/Jason Behnken)

EAST RUTHERFORD, N.J. (AP) — Running back Saquon Barkley is going to miss his second straight game with an ankle injury.

Coach Pat Shurmur announced Friday that Barkley and linebackers Alex Ogletree (hamstring) and Tae Davis (concussion) will not play for the New York Giants (2-2) against the Minnesota Vikings (2-2) Sunday at MetLife Stadium.

Barkley sustained a high sprain to his right ankle against Tampa Bay on Sept. 15. He worked out with trainers on Wednesday and Thursday and was limited in practice Friday.

The Giants' next game is at the New England Patriots on Thursday night.

Third-year pro Wayne Gallman is expected to start again. He also has had a sore neck this week.

The unavailability of Ogletree and Davis for the second straight week against one of the league's top rushing teams is a concern.

New York lost rookie inside linebacker Ryan Connelly for the season last weekend with a knee injury. Shurmur had hoped Ogletree or Davis would return this week.

David Mayo started on the inside with Connelly last week and played well. It is uncertain who will start at the other inside spot in the 3-4 scheme. Rookie Tuzar Skipper or veteran Nate Stupar are possibilities.