Another blown lead has Chargers reeling going into bye week 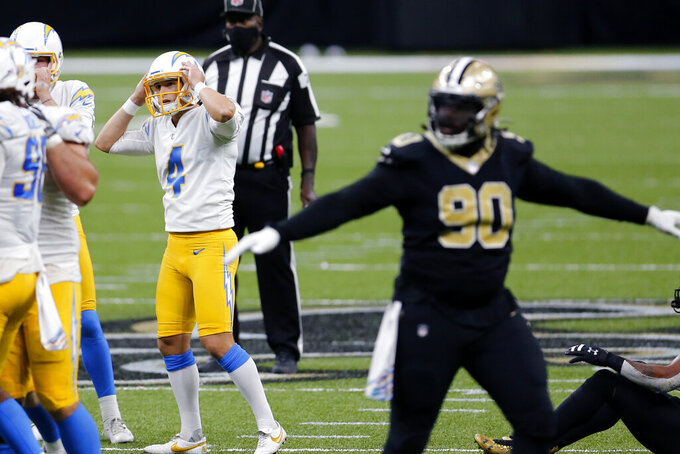 Los Angeles Chargers kicker Mike Badgley (4) reacts after missing a field goal in the second half of an NFL football game against the New Orleans Saints in New Orleans, Monday, Oct. 12, 2020. The Saints won in overtime, 30-27. (AP Photo/Brett Duke)

The Los Angeles Chargers were 5-1 two years ago in games decided by seven points or fewer.

They have been anything but clutch in close games since then.

Anthony Lynn's squad is 3-13 since the start of last season in close games. All five this year have been decided by one score, including Monday night's 30-27 overtime loss at New Orleans as Los Angeles became the first team in 17 years to blow leads of 17 points or more two straight weeks.

“Guys are putting themselves in position to win games. I could give you a ton of excuses and I'm not about that. We have to get it done,” Lynn said of the team's second 1-4 start in four years.

Justin Herbert became the first rookie quarterback to throw four touchdowns on “Monday Night Football” and didn't commit a crucial turnover, but a constant from the past two weeks is that there have been too many blown coverages by the defense.

As much as Lynn would not like to use injuries as an excuse, they have taken a brutal toll. The Chargers had eight starters either inactive or on injured reserve while wide receiver Keenan Allen, defensive end Uchenna Nwosu and cornerback Casey Hayward left the game with injuries. Defensive end Joey Bosa is dealing with multiple ailments and was only in on pass-rushing situations.

Because of the coronavirus pandemic shuffling their schedule five of the next six weeks, the Chargers get their bye week this week instead of the middle of next month. It certainly could not come at a better time.

While the Chargers hope to get healthy, the players hope to find something mentally to get them over the hump of close losses.

“The kid is playing out of his mind. We all need to be better for him and pick him up,” said tight end Hunter Henry of Herbert.

Herbert continues to show he is not rattled by blitzes. On third-and-7 on the Chargers second drive, New Orleans rushed seven but Herbert rolled right and completed a 17-yard strike to Keenan Allen for a touchdown. It was Herbert's third touchdown this season while facing a blitz.

The defense stepping up in the fourth quarter. They have forced only one three-and-out and are allowing an average of 138.6 yards per game in the final 15 minutes, which is second most in the league.

Justin Jackson had 94 scrimmage yards (71 rushing, 23 receiving) in his first extensive action in nearly two years. The running back had a 36-yard run during the first quarter, but averaged only 2.5 yards on his remaining 14 carries.

Michael Badgley missed the first extra point of his career and then had a 50-yard field-goal attempt on the final play of regulation hit off the right upright. Badgley is 7 of 10 on field goals this season and 2 of 6 from his career from 50 yards or more. Those are not good stats for someone nicknamed “The Money Badger.”

39.2% — Play success rate on first down. A successful play is measured as gaining 40% of the yards needed on first down (so 4 or more yards on first-and-10). The Chargers have the second-lowest success rate in the league and are 12% under the league average, meaning they are facing second-and-long on six out of every 10 plays on second down.

The Chargers face a favorable stretch of games after the bye week with four of their next five opponents having a losing record. Los Angeles hosts Jacksonville on Oct. 25 in its first game after the bye.