Another QB banged up, bad luck piles up for Bengals 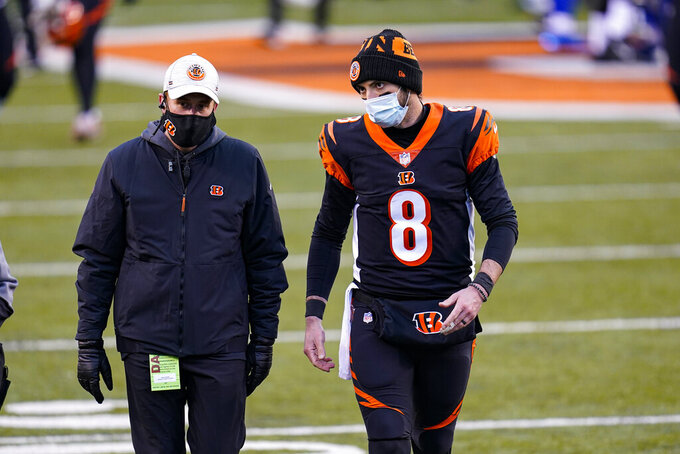 CINCINNATI (AP) — As if their luck couldn't get any worse this season, the Cincinnati Bengals might be down another quarterback.

Brandon Allen, the former practice squad quarterback who took over when Joe Burrow was lost for the season to a knee injury, limped off the field with a problem with his right knee late in the 30-7 loss to the Dallas Cowboys on Sunday.

Burrow, the Heisman Trophy winner who led LSU to the national title and then was the top overall pick in the draft, showed the potential to right the ship in Cincinnati before he tore up his left knee. Allen, who hadn't played in an NFL game in a year, has looked progressively better in the three games he's started, but the Bengals (2-10-1) have lost them all.

Ryan Finley, the other backup, relieved Allen against the Cowboys. He was sacked on two of the first three plays and couldn't move the chains. If Allen is unable to go on Dec. 21 against the Steelers — in prime time, no less — it will likely be Finley called on to face one of the league's best defenses.

After the game, Allen said he thinks the injury is a bruise but couldn't predict if he'd be ready for the Pittsburgh game.

“I tried to stay out there and walk it off,” he said.

The Bengals have journeyman Kevin Hogan on the practice squad, and it stands to reason that he could get a chance, too, if Allen is sidelined.

Cincinnati has had bad injury luck all season, especially with its offensive line. A season that started with hope for a better finish than last year's 2-14 finish has gotten increasingly worse as it wore on.

In Sunday's loss to Dallas, the Bengals fumbled the ball away on their first three possessions, leading to 17 straight points. To make matters worse, the starting quarterback for the Cowboys was Andy Dalton, Cincinnati's longtime QB who was released after Burrow was drafted.

“That's the type of year we're having — like nothing is going our way,” veteran receiver A.J. Green said.

“It's tough,” said defensive end Sam Hubbard, a Cincinnati native. “Everybody feels it from players, coaches, training staff, everybody feels how hard these losses are on us. You know, people are going to remember how you carry yourself, how you act in moments like these, and the only thing you can do is keep your head up and keep going forward.”

Bengals coach Zac Taylor is 4-24-1 in his second year. The word he used most in an interview after the game was "frustrating.”

Asked if he was worried about his job security, he said: “No, I just want to win a football game.”