Another step toward Kraken debut as practice facility opens 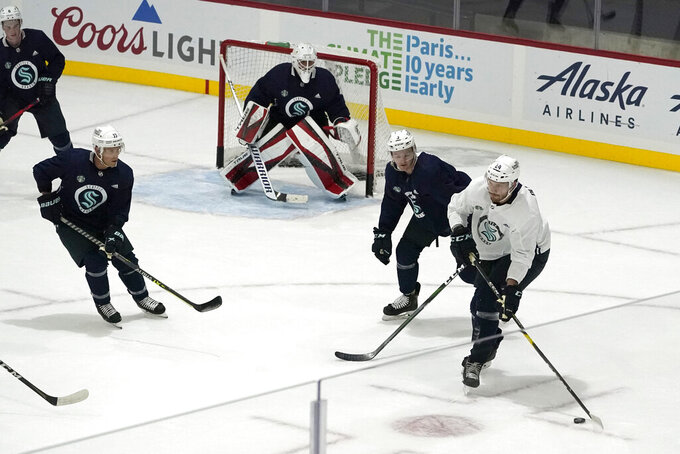 Seattle Kraken defenseman Jamie Oleksiak, right, looks to pass as he takes part in a practice session, Thursday, Sept. 9, 2021, during a media event for the grand opening of the Kraken's NHL hockey practice and community facility in Seattle. (AP Photo/Ted S. Warren)

SEATTLE (AP) — Just as the invited guests were being welcomed inside Thursday morning, the main practice rink at the Seattle Kraken’s practice facility was already filled with the sounds of pucks being shot and skates on ice.

It was an informal workout for the players who are already in town. But seeing the likes of forward Jordan Eberlee, goaltender Philipp Grubauer and Brandon Tanev was another reminder that the clock’s quickly ticking toward the debut of the NHL’s newest franchise.

While most of the focus has been on the construction of Seattle’s roster through the expansion draft and free agency, and the completion of the team's home arena a few miles away, the Kraken will open their $80 million training facility to the public this weekend.

The Kraken Community IcePlex includes three sheets of ice along with the business and hockey operations offices for the franchise. The team expects the building to be buzzing at all times, whether it’s the NHL team practicing on the main rink or youth hockey and learn-to-skate programs taking place on the other two sheets of ice.

Coach Dave Hakstol addressed the assembled crowd, noting he is a hockey dad with a son and daughter who play and discussing the importance of youth programs at the facility to help grow the game in the area.

“There are so many kids who love the game, play the game and what a great opportunity it is for our community," Hakstol said.

The facility is at the site of a former mall and is the anchor of a redevelopment project that includes a new light-rail station set to come online next month.

The Kraken could have gone smaller in scale or looked at different locations. But Leiweke referenced his time with the Seattle Seahawks and how much changed about the perception of that team when it moved from its small, cramped practice facility into its current massive building on the edge of Lake Washington.

“When I was with the Seahawks, we were missing that world class facility and I think when we built it, it was a game changer,” Leiweke said. “So we knew going into this, we needed to figure this piece out. And (majority owner) David Bonderman and our owners, encouraged us to dream and so the dream took us here.”

While the practice facility is already in use, the home for the Kraken still has a few weeks to go. Lewieke said everything remains on schedule for Climate Pledge Arena to be ready in time for its first official event on Oct. 22 and the first Kraken game on Oct. 23 against Vancouver.

“It’s going to be more spectacular than people think,” Leiweke said. “I know I’ve talked in superlatives, but I really believe it’s going to be the world’s most beautiful arena.”