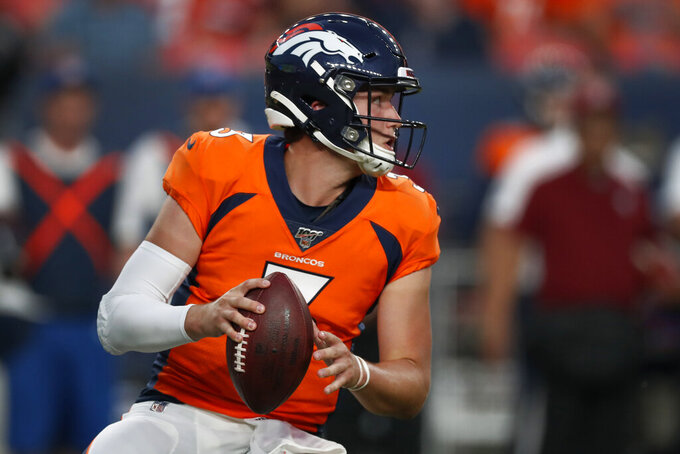 Denver Broncos quarterback Drew Lock (3) looks to pass against the San Francisco 49ers during the second half of an NFL preseason football game, Monday, Aug. 19, 2019, in Denver. (AP Photo/David Zalubowski)

DENVER (AP) — A person familiar with the situation says Denver Broncos rookie quarterback Drew Lock will miss the rest of the preseason with a sprained right thumb.

The person spoke to The Associated Press on the condition of anonymity Tuesday because the team hasn't revealed the severity of the injury. Lock is competing with Kevin Hogan to be Joe Flacco's backup.

Lock was hurt early in the third quarter of Monday night's preseason loss to San Francisco. The second-round pick out of Missouri was tripped up trying to leave the pocket and landed on his thumb as he attempted to pitch the ball to a receiver.

Denver has two preseason games remaining before the season opener Sept. 9 at Oakland.