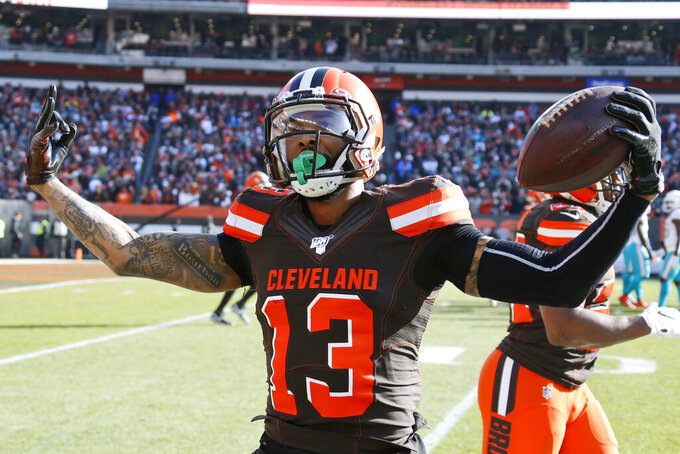 Cleveland Browns wide receiver Odell Beckham Jr. celebrates after a 35-yard touchdown during the first half of an NFL football game against the Miami Dolphins, Sunday, Nov. 24, 2019, in Cleveland. (AP Photo/Ron Schwane)

Beckham has been dealing with the injury for most of the season — his first with Cleveland — and plans to play the final four regular-season games before undergoing the operation, said the person who spoke on condition of anonymity because of the sensitivity of the situation.

The procedure has not been scheduled, the person said.

NFL Network was first to report Beckham's plan for surgery.

Beckham's injury could help explain his lack of major production with the Browns, who acquired the three-time Pro Bowler from the New York Giants in a trade in March.

Beckham has 57 receptions for 805 yards, solid stats but not up to his standards. He's only caught two touchdown passes and has only one 100-yard receiving game in his past 10.

He was listed as “limited” on the team's injury report this week with a groin injury. Beckham skipped most of the team's offseason program and didn't play in any exhibition games.

“I’ve been pretty much banged up all year since whatever happened in camp,” Beckham said earlier this week. "I’ve been playing through it, doing whatever I can just to make it to Sunday for the game. So anytime that Sunday comes around, 1 o’clock, 4 o’clock, 8, Monday night, Thursday, I’m going to give this team everything that I have, no matter what.”