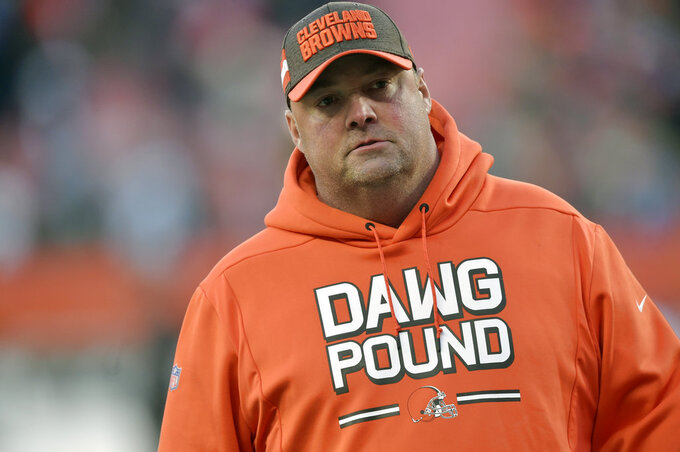 FILE - In this Sunday, Dec. 9, 2018 file photo, Cleveland Browns offensive coordinator Freddie Kitchens walks on the field after an NFL football game against the Carolina Panthers in Cleveland. A person familiar with the decision says the Browns have denied requests from other teams to interview offensive coordinator Freddie Kitchens. There has been outside interest in Kitchens, who took over Cleveland’s offense in October, said the person who spoke Thursday, Jan. 3, 2019 on condition of anonymity because the Browns are not commenting during their coaching search other than to confirm completed interviews. (AP Photo/David Richard, File)

CLEVELAND (AP) — The Browns are protecting Freddie Kitchens like he was a franchise quarterback, not a coach.

While Kitchens waits for his interview to possibly become Cleveland's head coach, the Browns have denied requests by other teams to interview their interim coordinator who brought out the best in rookie quarterback Baker Mayfield during the final eight games.

Several teams have inquired about Kitchens, who took over the offense in late October, said the person, who spoke Thursday on condition of anonymity because the Browns are not commenting during their coaching search other than to confirm completed interviews.

Because Kitchens is still under contract, the Browns can rebuff any interview demands for coordinator's jobs. They can't deny any candidate a chance to interview for a head-coaching position.

The 44-year-old Kitchens emerged as a potential head coach in Cleveland after revamping the offense and building a strong bond with quarterback Baker Mayfield, who set the league rookie record with 27 touchdown passes. In his last eight games, Mayfield completed 68 percent of his passes for 2,254 yards with 19 touchdowns and eight interceptions.

Kitchens took over game-planning and play-calling duties on Oct. 29, when coach Hue Jackson and offensive Todd Haley were fired. Cleveland's offense played with a faster tempo and was far more creative with Kitchens calling the shots.

Browns general manager John Dorsey understands Kitchens' value and might be able to keep him as a coordinator if he doesn't hire him as coach. It's also possible the Browns' next coach will want to hire his own coordinators.

Dorsey said earlier this week he planned to interview Kitchens for the team's vacancy at some point as the Browns make an important hire following a surprising 7-8-1 season.

Like Kitchens, Stefanski inherited an offense that was having problems. The 36-year-old was promoted from quarterbacks coach to coordinator last month when Vikings coach Mike Zimmer fired John DeFilippo with three games left and Minnesota in playoff contention.

Stefanski has worked his way up the coaching ranks and become one of the NFL's rising young assistants. He was nearly hired by Giants coach Pat Shurmur as his offensive coordinator last year, but Zimmer made sure to keep him on his staff.

He's the son of long-time NBA executive Ed Stefanski, now with the Detroit Pistons. Stefanski broke into the league as an assistant under former Vikings coach Brad Childress in 2006 and has been with the club since, surviving two head coaching changes while climbing in power.