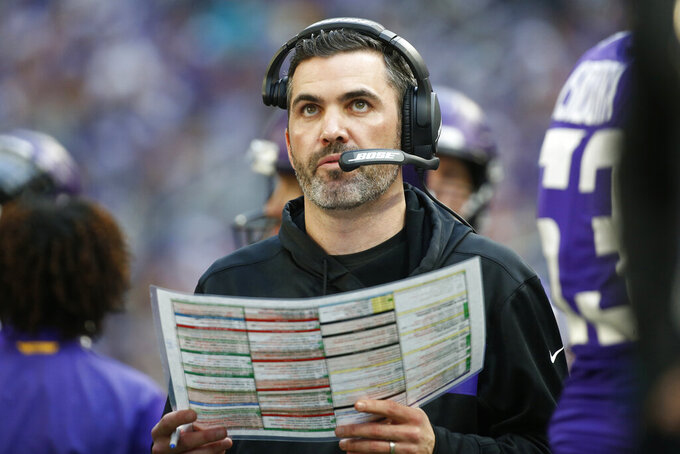 FILE - In this Dec. 16, 2018, file photo, Minnesota Vikings interim offensive coordinator Kevin Stefanski watches from the sideline during the first half of an NFL football game against the Miami Dolphins in Minneapolis. The Cleveland Browns are hiring Stefanski as their new coach, a person familiar with the decision told the Associated Press. Stefanski agreed to accept the position Sunday, Jan. 12, 2020, a day after Minnesota was beaten by San Francisco in the NFC playoffs, according to the person who spoke to the AP on condition of anonymity because the team has not announced the decision. (AP Photo/Bruce Kluckhohn, File)

Cleveland is hiring the Vikings' offensive coordinator to be their new coach, a person familiar with the decision told The Associated Press.

Stefanski agreed to accept the position Sunday, a day after Minnesota was beaten 27-10 by the San Francisco 49ers in the NFC playoffs, according to the person who spoke to the AP on condition of anonymity because the team has not announced the decision.

The 37-year-old Stefanski nearly became Cleveland's coach a year ago but finished as a runner-up when the Browns selected Freddie Kitchens, who was fired after a disappointing, drama-filled 6-10 season. Stefanski spent this past season bolstering his varied resume running Minnesota's offense, and the Browns made sure they didn't let him get away again.

Stefanski, who had been with the Vikings since 2006, is Cleveland's 10th full-time coach since the franchise's expansion rebirth in 1999. He is the sixth coach hired by Browns owner Jimmy Haslam since he bought the team in 2012.

The decision means that no minority candidates were hired by NFL teams this offseason. Dallas, Carolina, Washington and the Dallas Cowboys also filled vacancies.

Stefanski will inherit a roster that includes plenty of offensive talent with quarterback Baker Mayfield, wide receivers Odell Beckham Jr. and Jarvis Landry, and running back Nick Chubb. But the Browns didn't live up to their billing under Kitchens, who was unable to instill discipline and couldn't tamper nearly endless distractions around the club.

Stefanski's life has been immersed in sports. His father, Ed, is a longtime NBA executive who currently works as an adviser for the Detroit Pistons.

The Browns chose Stefanski after a two-week search during which they interviewed eight known candidates. Patriots offensive coordinator Josh McDaniels and 49ers defensive coordinator Robert Saleh were believed to be the other finalists.

Stefanski went head to head with Saleh in Saturday's game, but the 49ers' defensive dominance didn't seem to sway Haslam and his search committee, which was led by chief strategy officer Paul DePodesta.

A year ago, DePodesta recommended Stefanski for the Browns' opening but was overruled by Haslam and then-general manager John Dorsey, who was recently fired. Stefanski was the only candidate to be interviewed by the Browns for the second straight year and he will become the 18th full-time coach in franchise history.

Stefanski worked with Minnesota's running backs, tight ends and quarterbacks under three head coaches. This will be his first time as a head coach at any level. Quarterback Kirk Cousins developed with Stefanski and that was appealing to the Browns; Mayfield struggled in his second season after breaking the league's rookie record for touchdown passes in 2018.

Now that they have their coach, the Browns will look to pair him with a new general manager after cutting ties with Dorsey on Dec. 31 after two seasons. Dorsey, who rebuilt Cleveland's roster, left after he refused to accept a reduced role offered by Haslam.

On Saturday, the Browns requested permission to interview Eagles vice president of football operations Andrew Berry, who spent three years in Cleveland. Berry reportedly favored Stefanski during last year's coaching search and may now have a chance to work alongside him.