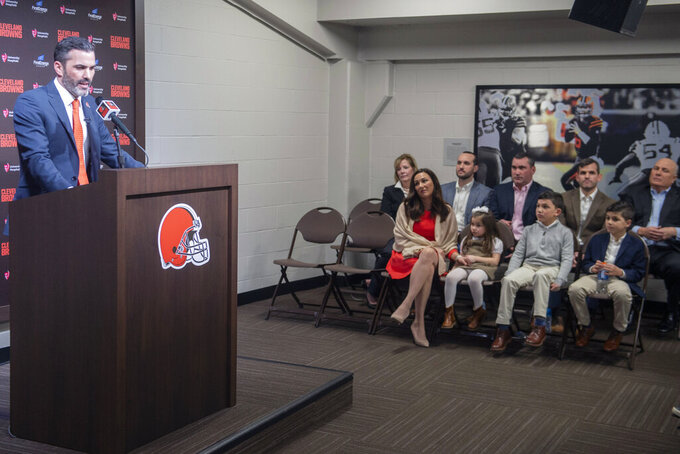 CLEVELAND (AP) — The Browns could be turning a little more purple.

After hiring former Vikings offensive coordinator Kevin Stefanski as its coach, Cleveland interviewed Minnesota assistant general manager George Paton for its GM opening this past weekend, a person familiar with the team's itinerary told The Associated Press on Monday.

Paton, who worked for the past 13 years in Minnesota with Stefanski, met with the team's search committee — including Stefanski — on Saturday, said the person who spoke on condition of anonymity because the team is not confirming any interviews during the process.

Paton is expected to meet again with the Browns this week.

He would seem to be a natural fit with Stefanski, who has spent the past week interviewing candidates for his coaching staff while helping in the search for a GM to replace John Dorsey. The Browns ousted Dorsey last month following a 6-10 season.

Berry was thought to be an early favorite since he worked in Cleveland's front office from 2016-18.

However, because of his background with Stefanksi, Paton could be a better match. He's drawn interest in the past from other NFL teams, but spent the past 13 seasons as Minnesota GM Rick Spielman's right-hand man. Paton and Spielman worked together in Chicago and Miami before they were hired by the Vikings.

Paton was responsible for coordinating the scouting and personnel departments in Minnesota and was heavily involved in preparation for the draft.

Cleveland's roster has been dramatically upgraded the past two years, thanks to Dorsey, who inherited a team that went 0-16 in 2017.

Meanwhile, Stefanski has been rounding out his staff. He's hiring former Raiders coach Bill Callahan to be his offensive line coach, the person said. Callahan, who went to the Super Bowl with Oakland, will replace James Campen, who was with the Browns for one season after 15 in Green Bay. Callahan spent much of this past season as interim coach of the Washington Redskins.

Stefanski is retaining special teams coordinator Mike Priefer, who worked with Stefanski in Minnesota from 2011-18 before joining the Browns last year. Assistant special teams coach Doug Colman is also coming back after that unit showed major improvement this season.

Stefanski is also keeping running backs coach Stump Mitchell, the person said. Mitchell had a hand in the development of second-year back Nick Chubb, who finished with 1,494 yards rushing.

San Francisco defensive backs coach Joe Woods appears to be Stefanski's choice for defensive coordinator. But the Browns can't finalize any deal with him until after the Super Bowl.