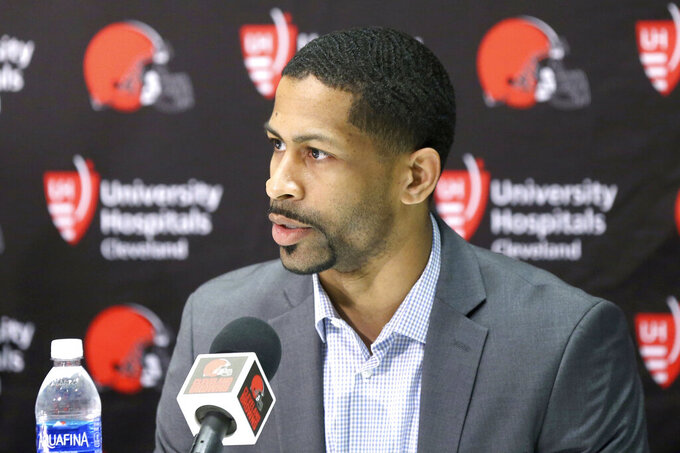 CLEVELAND (AP) — Andrew Berry has quickly gotten to work on restructuring the Browns. In a drastic way.

College scouting director Steve Malin also has left the team, according to the person who spoke to the AP on condition of anonymity because the moves have not been made public.

Wolf, the son of Hall of Fame executive Ron Wolf, and Highsmith were both brought to Cleveland two years ago by former GM John Dorsey, who resigned on Dec. 31 after declining an offer to take a lesser role with the team.

And while the Browns change their front-office makeup, new coach Kevin Stefanski has been assembling his staff. He's hiring former NFL quarterback and coach Alex Van Pelt as his offensive coordinator, the person said. Van Pelt spent the past two seasons as Cincinnati's quarterbacks coach.

Highsmith's departure was expected for weeks and happened almost immediately after Berry returned following one season in Philadelphia as the Eagles' vice president of football operations. Berry, who worked in Cleveland's front office from 2016-18, is the NFL's youngest GM and only the second African American currently serving in that role.

Highsmith had been rumored to be on his way out since Dorsey's surprising ouster. Dorsey brought Highsmith and Wolf to Cleveland after working with them in Green Bay.

Highsmith, who played six seasons in the NFL, has been linked to a possible job at Miami, where he was a star running back for the Hurricanes in the 1980s.

“I wanted to go in a different direction because my philosophy on football is different from theirs,” Highsmith told ESPN. “I may go to Aruba, or go to the Masters. I’m going to take some time to do some fun stuff. I may also clean my garage, who knows. As far as football goes, I’ll just have to wait to see what happens. I love all parts of the game.

"I’ve never been a title guy, working and contributing has always been my goal. So I do hope to return to the NFL.”

Cleveland's front office has been in almost constant turmoil since owners Dee and Jimmy Haslam bought the team in 2012. Dorsey was hired following some dreadful drafts and he overhauled the team's roster. But his group, which included Highsmith and Wolf, didn't embrace some of the data provided by the Browns' analytics department and something had to give.

The Haslams have fired five coaches and five lead executives in their football department during their tenure.

The Browns were expected to contend this season but went just 6-10 amid endless drama. Coach Freddie Kitchens was fired after one season.