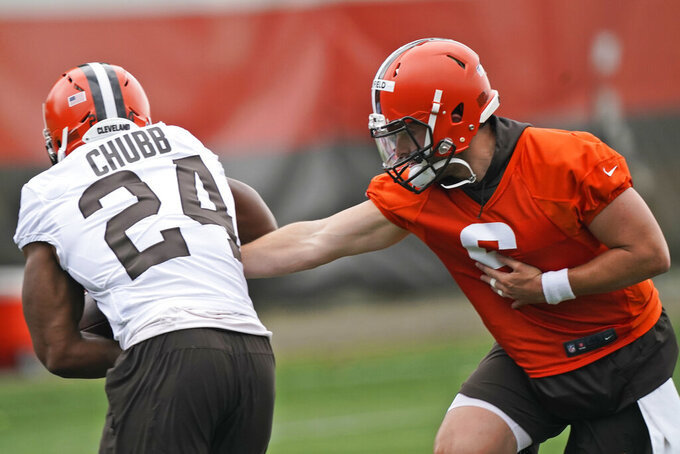 Cleveland and the star running back agreed Saturday night to a three-year, $36.6 million contract extension, a person familiar with the negotiations told the Associated Press on Saturday night.

Chubb has developed into one of the NFL's best backs in three years. The deal guarantees him $20 million, said the person who spoke on condition of anonymity because the sides are still finalizing the package.

Chubb was entering the final year of his rookie contract with Cleveland, which drafted him in the second round (No. 35 overall) from Georgia in 2018.

The sides have been working toward the contract for several days, and the agreement came just a few hours after Browns owners Jimmy and Dee Haslam were asked about Chubb, a man of few words but many skills.

“Great player, even better person. I can’t say any more than that," Jimmy Haslam said at training camp. "There are very few people out there like Nick Chubb.”

The 25-year-old Chubb has become the heart and soul of Cleveland's team while endearing himself to Browns fans with a no-nonsense running style and impeccable work ethic.

On Friday, Browns Pro Bowl guard Joel Bitonio praised Chubb, who has dazzled his teammates on the field and in the weight room.

"He’s just a special guy, man," Bitonio said. "Like great teammates in my eight years here, Nick Chubb’s one of them. He just does everything right off the field, on the field, you never hear him complain — or really never hear him at all.”

Chubb rushed for 1,067 yards last season despite missing four games with a knee injury. In 2019, he finished second in the league with 1,494 yards and 13 touchdowns. He averaged 10 yards per carry in the fourth quarter last season.

With Chubb and Kareem Hunt, the Browns have one of the best 1-2 rushing tandems in the league.

Last month, Hunt urged the Browns to lock up his teammate long-term.

“Please pay that man,” Hunt said. "He’s a freak of nature. And he’s a brother to me, and I love what he does on and off the field. Just a great person and teammate.”

Chubb was one of four significant Browns players eligible for an extension this summer. Quarterback Baker Mayfield, cornerback Denzel Ward and guard Wyatt Teller are also in line for big pay days.