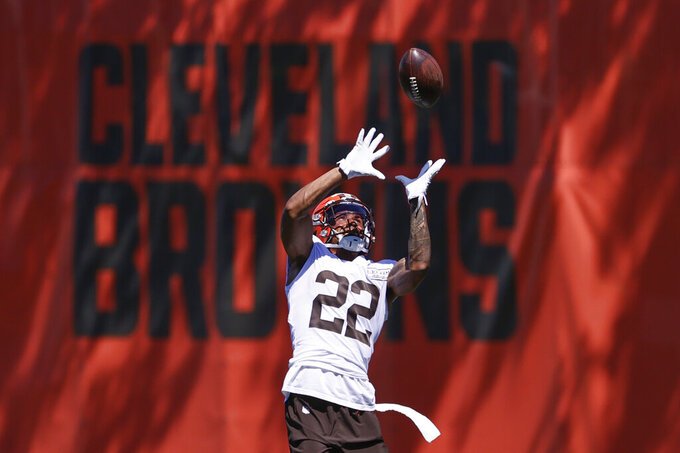 BEREA, Ohio (AP) — For the second time in training camp, the Browns defense has been rocked by a major injury.

Rookie safety Grant Delpit tore his right Achilles tendon during practice, a person familiar with the injury told the Associated Press on Monday night. The second-round pick will need surgery and is likely out for the season, said the person who spoke on condition of anonymity because the team has not disclosed the severity of the injury.

Delpit was expected to start for Cleveland's rebuilt defense. The Browns lost starting linebacker Mack Wilson last week with a hyperextended knee and believe he will miss significant time.

Delpit, who played for national champion LSU, got hurt during individual drills early in practice. He pounded his hand on the ground in frustration before being helped onto a cart and taken inside the team's facility.

The 6-foot-2, 213-pounder was penciled in to start alongside Karl Joseph, who was signed as a free agent during the offseason but is nursing a foot injury. The Browns also signed veteran safety Andrew Sendejo for depth.

Delpit was seen as a long-term upgrade at a position that was a problem for the Browns last season.

Not long after Delpit got hurt, starting cornerback Greedy Williams left the field accompanied by athletic trainers with a reported shoulder injury. Williams and Delpit were college teammates.

Williams, who missed Cleveland's first four games last season with a pulled hamstring, did not return to the field. His injury was compounded by cornerback Terrance Mitchell sitting out with a knee injury and backup nickel back M.J. Stewart pulling up in practice with a hamstring injury.

The Browns were already missing two other potential starters in Wilson and projected nickel back Kevin Johnson, who sustained a lacerated liver on a routine play in practice.

Johnson was fallen on by rookie tight end Harrison Bryant while trying to break up a pass during a 7-on-7 drill. Johnson spent two days at University Hospital before being released on Saturday.

If that wasn't enough, Pro Bowl running back Nick Chubb just returned from a concussion he got last week when thrown to the ground by Wilson on the team's first full day in pads. The Browns are also without starting center JC Tretter. He underwent knee surgery before camp opened and it's not known how long he'll be out.

It's been a strange couple of days for Stefanski. On Sunday, he was one of the 77 false positive COVID-19 tests delivered by the NFL's lab partner.

Stefanski, who has three young children, was at home when he got the call. He left his family's house and isolated at a condominium near the team's facility where he stayed during his transition from Minnesota.

It took four hours before Stefanski learned the test was negative.

“It was not fun. I can laugh about it now, but truly, it was not fun to have that phone call very early in the morning and not get the news that it was potentially an error until later," he said. "It is something that I take seriously, and our whole goal with our players and our staff is to keep everybody safe. That certainly was not fun.”