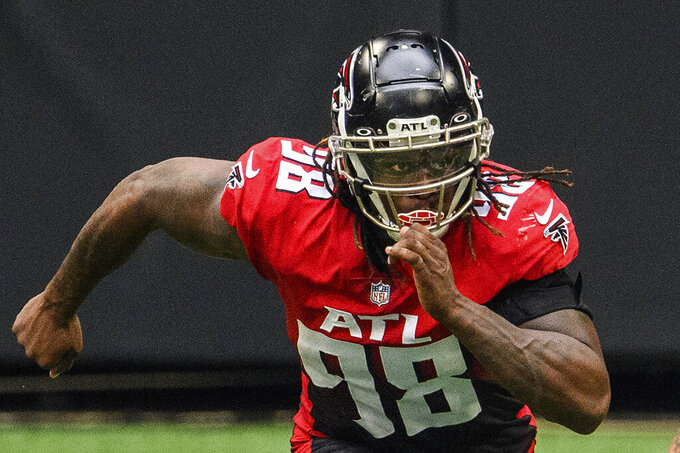 CLEVELAND (AP) — The Browns had Takk McKinley on their radar last season. He'll soon be on their roster.

Looking to bolster their defensive front with another edge rusher to complement All-Pro Myles Garrett, Cleveland plans to sign the free agent end to a one-year contract, a person familiar with the negotiations told The Associated Press on Tuesday.

McKinley, who was a first-round pick by Atlanta in 2017, will sign a deal worth $4 million with a chance to reach incentives, said the person who spoke on condition of anonymity because teams can't announce new deals until Wednesday, when the new NFL year begins.

After McKinley was released by Atlanta four games into last season, the Browns unsuccessfully tried to claim him off waivers three times. He had been with the Raiders after failing physicals with Cincinnati and San Francisco.

The Browns entered free agency $25 million under the salary cap, and were expected to make a run at one of the high-profile rushers on the market. However, most of the top-tier players, including Shaq Barrett, Bud Dupree, Trey Hendrickson and Carl Lawson, were off the market on Monday's first day of negotiating.

The 25-year-old McKinley isn't a household name, and he's had some issues. But Browns general manager Andrew Berry clearly likes him and he may be able to help Garrett get free from some double teams. He also gives Cleveland's defensive line some depth after the team chose not to re-sign end Olivier Vernon and released Adrian Clayborn.

McKinley had 13 combined sacks over his first two seasons, but only 4 1/2 over the next two. The Falcons didn’t pick up the fifth-year option on his rookie contract, and cut him while he dealt with a groin injury.

McKinley's signing is the second in free agency for the Browns, who agreed to terms on Monday with former Rams safety John Johnson III on a three-year, $33.75 million contract. The Browns also tendered an offer to restricted free agent wide receiver KhaDarel Hodge.

Also, the Browns will have another hole to fill in their secondary as Terrance Mitchell, who started every game last season, will reportedly sign a two-year deal with the Houston Texans. Mitchell was pushed into the starting lineup after Greedy Williams suffered a shoulder nerve injury in training camp and missed all of 2020.

NOTES: Browns WR Ryan Switzer posted a video on Twitter to thank supporters after his infant son, Christian, underwent surgery last weekend. The 9-month-old is home, but Switzer said he's still undergoing testing. “There was a point last week when we didn’t think that we would be here right now,” Switzer said. “But in our darkest days, honestly I can say that the support we got from friends and family and complete strangers was overwhelming.” Switzer also thanked the Browns and Pittsburgh Steelers, his former team.