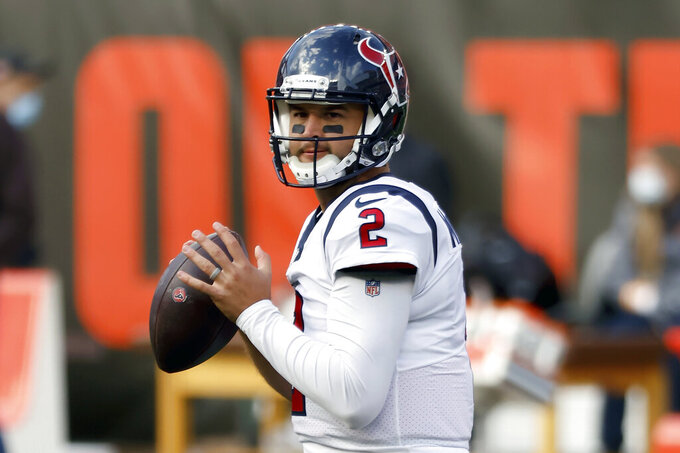 FILE - Houston Texans quarterback AJ McCarron (2) warms up prior to the start of an NFL football game against the Cleveland Browns, Sunday, Nov. 15, 2020, in Cleveland. While they await a ruling on Deshaun Watson, the Cleveland Browns are working out quarterbacks this week to make sure they're prepared for training camp. A.J. McCarron and Josh Rosen, two QBs who have been on Cleveland's radar previously, are among the quarterbacks getting a look, said a person familiar with the team's plans on Thursday, July 21, 2022. (AP Photo/Kirk Irwin, File)

CLEVELAND (AP) — The Cleveland Browns reached an agreement Thursday with free agent quarterback Josh Rosen on a one-year contract, giving them another veteran as they await a ruling on Deshaun Watson, a person familiar with the negotiations told The Associated Press.

Rosen, who was on Cleveland's radar before the 2018 draft, will officially sign the contract Friday, said the person, who spoke on condition of anonymity because the team has not announced the deal.

The 25-year-old Rosen worked out this week for the Browns along with A.J. McCarron as they make contingency plans in case Watson is suspended by the NFL.

The Browns want to open training camp next week with four quarterbacks, according to the person.

Watson is facing a possible NFL suspension after being accused by two dozen female massage therapists of sexual misconduct during sessions while the three-time Pro Bowler played for the Houston Texans.

Former federal judge Sue L. Robinson, the league's disciplinary officer, is deciding whether Watson, who was traded to the Browns in March, has violated the personal conduct policy.

If Watson is suspended, the Browns intend to go with veteran Jacoby Brissett as their starter and Rosen as his backup.

Brissett has started 37 games during his pro career with New England, Indianapolis and Miami. He signed as a free agent one day after Cleveland enticed Watson to waive his no-trade clause with a five-year, $230 million contract that's fully guaranteed.

Josh Dobbs is also on Cleveland's roster, but the 27-year-old has never started an NFL game and the Browns wanted to bring in another veteran in case Watson is out for multiple games.

Rosen was one of several top college quarterbacks the Browns considered drafting with the first overall pick in 2018 before choosing Baker Mayfield. Cleveland dealt Mayfield to Carolina earlier this month after agreeing to pick up $10 million of his salary for 2022.

Rosen was drafted 10th that year by Arizona. He went 3-13 in starts for the Cardinals and Miami. He was with Atlanta last season and appeared in four games.

The 31-year-old McCarron nearly came to Cleveland in a 2017 trade from Cincinnati, but the deal was voided when the Browns failed to file the appropriate paperwork with the league on time. McCarron also has played for Oakland and Houston.