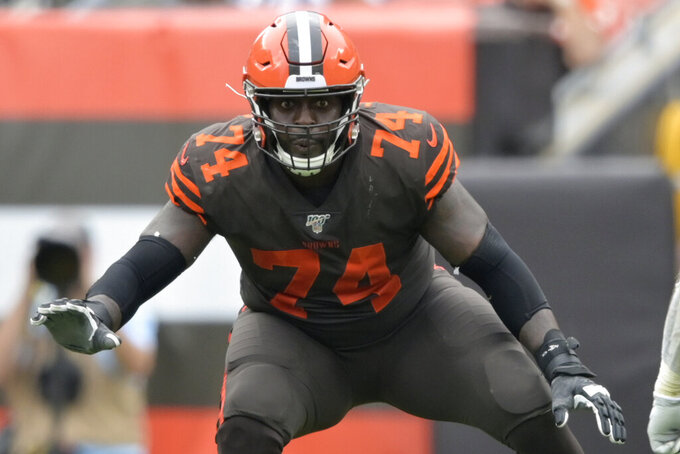 FILE - In this Sept. 8, 2019, file photo, Cleveland Browns offensive tackle Chris Hubbard (74) blocks in the second half of an NFL football game against the Tennessee Titans in Cleveland. Hubbard agreed to rework his contract after the team signed free agent Jack Conklin, a person familiar with the deal told The Associated Press on Thursday, March 26, 2020. (AP Photo/David Richard, File)

CLEVELAND (AP) — Browns right tackle Chris Hubbard has agreed to rework his contract and take a substantial pay cut after the team signed free agent Jack Conklin, a person familiar with the deal told The Associated Press on Thursday.

Hubbard, who lost his starting job when Cleveland signed Conklin to a three-year, $42 million last week, will make a base salary of $2.5 million next season, said the person who spoke on condition of anonymity because the team doesn't publicly disclose contracts.

There had been speculation Hubbard would be released, but the Browns believe he still has value as a backup in case Conklin gets hurt.

Hubbard signed a five-year, $36.5 million contract with the Browns in 2018 after spending four seasons with the Pittsburgh Steelers. The 28-year-old started 29 of 30 games over two seasons with Cleveland, but the team's decision to add Conklin will change Hubbard's role dramatically.

It's possible he'll serve as the team's “swing” tackle or Hubbard could compete for the starting job at right guard.

Billings agreed to a one-year, $3.5 million deal last week. The 25-year-old gives Cleveland more muscle up front and a proven run stopper. The 328-pounder started 30 games over the past two seasons with Cincinnati, which drafted him in the fourth round in 2016.

Brown was originally signed as an undrafted free agent by the Giants in 2018. He's played in four career NFL games— one with New York and three for Miami.