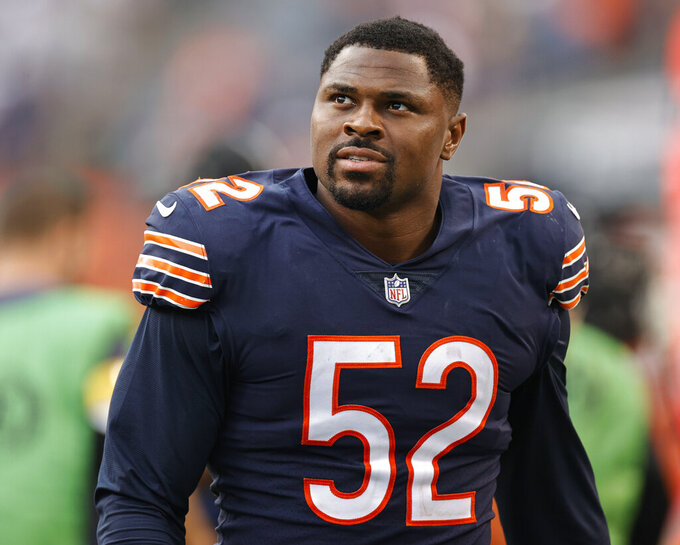 FILE - Chicago Bears' Khalil Mack walks off the field after an NFL football game against the Detroit Lions, Oct. 3, 2021, in Chicago. The Los Angeles Chargers have agreed to acquire Mack from the Bears in exchange for two draft picks, two people familiar with the negotiations confirmed to The Associated Press on Thursday, March 10, 2022. The people spoke on condition of anonymity because the trade cannot become official until the start of the new league year on Wednesday. (AP Photo/Kamil Krzaczynski, File)

The Bolts are taking that first step by adding another premier pass rusher to pair with Joey Bosa.

The Chargers agreed to acquire defensive end Khalil Mack from the Chicago Bears in exchange for two draft picks, two people familiar with the negotiations confirmed to The Associated Press on Thursday. The people spoke on condition of anonymity because the trade can’t become official until the start of the new league year on Wednesday.

The Chargers are expected to send a second-round pick this year and a 2023 sixth-round selection to the Bears for the three-time All-Pro defender.

Staley said during last week's NFL scouting combine in Indianapolis that the defensive line and secondary were going to be areas of emphasis during free agency and the draft.

Los Angeles, 9-8 last season, got off to a 4-1 start but missed the playoffs for the third straight season, winning back-to-back games only once after Week 5, and losing three of the final four games.

A big reason for the Chargers' struggles down the stretch was their defense. Staley brought in an attacking 3-4 scheme that made the the Rams the top-ranked unit in 2020, but he didn't get the same results with the Chargers, who were 23rd in total defense and third worst against the run.

The Chargers allowed 269 points after halftime, tied with the 2015 New Orleans Saints for most since 1991. The 138.9 yards per game allowed on the ground was the worst by a Chargers defense since 2003.

Offenses converted 49.5% of their third-down opportunities, the third-highest rate since 1991.

Bosa had 10 1/2 sacks in making the Pro Bowl for the fourth time in his six-year career. But Los Angeles was tied for 20th with 35 sacks and in the middle of the league rankings with 21 takeaways.

“I overestimated where we may be with that because I love the scheme, I love the system and I love the coaching staff. We have a lot of work to do," Telesco said about the unit at the end of last season.

The move will reunite Staley with Mack. Staley was Mack's linebacker coach when the Bears acquired Mack from the Raiders during the 2018 preseason.

When Staley was hired by the Chargers last January, he credited working with Mack for helping tremendously in his development as a coach.

“I learned a lot more from Khalil Mack than he learned from me,” Staley said at the time. “I drew a lot of confidence being able to coach a guy like him and I think that that first season in Chicago and that first experience, I felt like, you know, I could do this someday.”

Mack, who turned 31 on Feb. 22, will be going into his ninth NFL season. He was the fifth overall pick by the Raiders in the 2014 draft and was The Associated Press' Defensive Player of the Year in 2016. He was traded to the Bears during the 2018 preseason after a contract dispute.

The Bears opted for major changes after going 6-11 and missing the playoffs for the ninth time in 11 years. The fired general manager Ryan Pace and coach Matt Nagy, replacing them with Ryan Poles and Matt Eberflus.

Trading Mack for draft capital is the first big step by the new regime toward overhauling the roster.

Pace’s acquisition of Mack in a blockbuster trade with Oakland just before the start of the 2018 season helped transform a solid defense into an elite unit and propelled the Bears to the NFC North championship in Nagy’s first year. Mack was an All-Pro that season with 12 1/2 sacks, helping Chicago go 12-4 and make the playoffs for the first time since 2010. But the Bears lost a wild-card game at Soldier Field to Philadelphia.

Chicago never won a playoff game with Mack. And his production slipped after that season: He had 8 1/2 sacks in 2019 and nine the following year.

Mack got off to a good start last season with six sacks in seven games. But a foot injury in Week 3 against Cleveland led to him being placed on season-ending injured reserve in November and undergoing surgery.

Mack has three seasons remaining on his contract, which is worth $63.9 million. Chicago will have $24 million in dead space on the salary cap in 2022 due to prorated bonuses accelerating onto this year's cap.

With Mike Williams signing a $60 million, three-year contract earlier this week, the Chargers will have two of the top six wide receivers and two of the top three edge rushers in average salary per year.