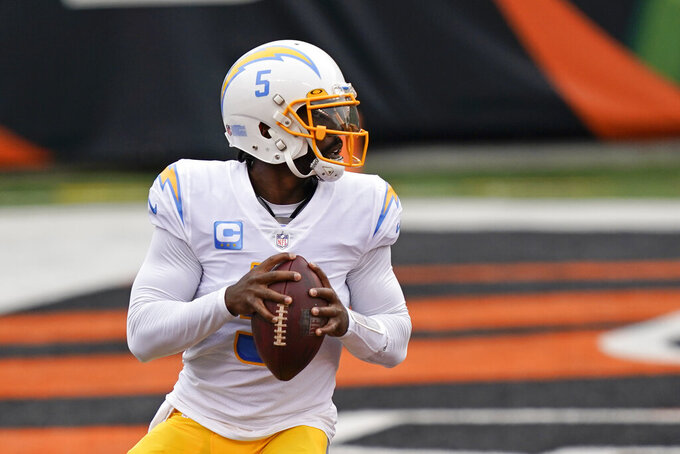 Los Angeles Chargers quarterback Tyrod Taylor (5) looks to throw during the first half of an NFL football game against the Cincinnati Bengals, Sunday, Sept. 13, 2020, in Cincinnati. (AP Photo/Bryan Woolston)

The person spoke to The Associated Press on condition of anonymity Wednesday because of medical restriction issues.

Coach Anthony Lynn said Taylor is still not 100% and that rookie Justin Herbert will get his second NFL start on Sunday against the Carolina Panthers.

Lynn did not have a timetable on how long Taylor would be out but said that the 10-year veteran quarterback was at the team's complex and working with Herbert. When asked about his level of frustration with what happened, Lynn said he wasn't angry about what occurred because the mistake wasn't intentional.

“There were complications with the shot but I know the man (who gave it). People make mistakes. It is something we will talk about internally,” Lynn said.

Herbert was the Chargers' surprise starter in last Sunday's 23-20 overtime loss to the Kansas City Chiefs. Lynn said he didn't find out until less than five minutes before kickoff that Taylor would be unable to play.

Herbert said he found out he was playing right as the Chargers were lining up to receive the opening kickoff.

Taylor was taken to the hospital due to difficulties breathing after Lynn said he had a reaction to an injection. Taylor was released Sunday night, He was briefly on the Chargers’ injury report Friday due to a rib injury he suffered in the Sept. 13 opener against the Cincinnati Bengals. Taylor was taken off it, though, after fully participating in practice and taking all of the snaps with the first team.

The NFL Players Association said on Wednesday that they have been in contact with Taylor and his agent and have started an investigation into the matter. ESPN first reported the punctured lung.

Taylor's teammates echoed Lynn in voicing confidence about the team's medical staff despite what happened.

“I don’t think there should be any lost trust. I mean, stuff happens all the time. He’s done that procedure plenty of times before this,” defensive tackle Linval Joseph said.

Tight end Hunter Henry, who has had knee injuries the past two seasons, also said he had faith in the team doctors, but that it wasn't a good situation.

“It’s not good, and I know none of us think it’s good at all. But we’re going to continue to move forward,” he said.

Herbert, the sixth overall pick in April's draft, became the ninth quarterback since the merger to throw for more than 300 yards in his debut. He was 22 of 33 for 311 yards and a touchdown, but he also threw an interception late in the third quarter that the Chiefs converted into a tying touchdown.

Lynn said he is eager to see how Herbert does with a week of practice with the first unit. Los Angeles is 1-1 while Carolina is 0-2 under first-year coach Matt Rhule.

“We put him in some tough situations last week where he hadn’t practiced certain things.,” Lynn said. "He didn't panic and made some really nice throws in that game and moved around so that he could extend plays. You know, he did some good things in that game, but he was not fully prepared because he didn’t take all the reps in practice.

“I’m just looking forward to seeing him with a week of practice underneath his belt, and take it every single rep as a starter.”