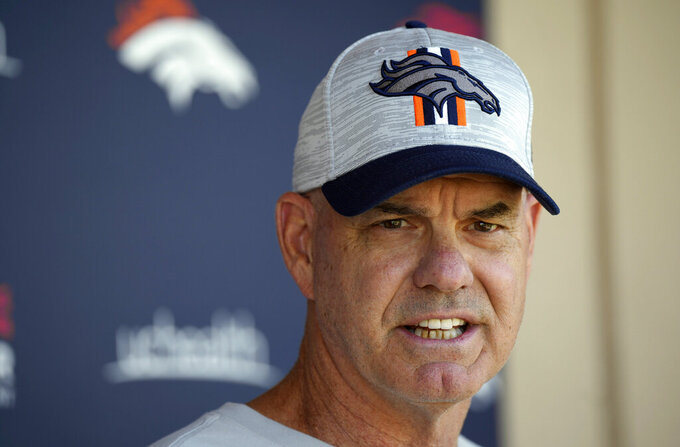 FILE - Denver Broncos defensive coordinator Ed Donatell responds to a question during a news conference Thursday, Sept. 16, 2021, at the NFL football team's headquarters in Englewood, Colo. Donatell has agreed to become the defensive coordinator of the Minnesota Vikings under head-coach-to-be Kevin O'Connell, according to a person with knowledge of the decision. The person spoke to The Associated Press on condition of anonymity on Thursday, Feb. 10, 2022, because the Vikings have not yet announced the hire. (AP Photo/David Zalubowski, File)

MINNEAPOLIS (AP) — Ed Donatell has agreed to become the defensive coordinator of the Minnesota Vikings under head-coach-to-be Kevin O'Connell, according to a person with knowledge of the decision.

The person spoke to The Associated Press on condition of anonymity on Thursday because the Vikings have not yet announced the hire. They're waiting first to finalize a contract with O'Connell, the offensive coordinator for the Super Bowl-bound Los Angeles Rams.

After the Rams play for the championship on Sunday, the 36-year-old O'Connell can finally be introduced as the 10th coach in Vikings history. O'Connell is expected to then make the 65-year-old Donatell his most important assistant for his first experience running a team.

Donatell has 10 seasons on his resume as a defensive coordinator in the NFL, including the last three years with the Denver Broncos under coach Vic Fangio, who was fired last month. The Broncos were third in the league in 2021 in fewest point allowed and eighth in fewest yards allowed.

From 2000-03, Donatell directed the defense for the Green Bay Packers. He was defensive coordinator for the Atlanta Falcons from 2004-06. He has worked 31 years in the league, primarily coaching defensive backs.

Prior to joining the Broncos, Donatell spent four seasons (2015-18) supervising the secondary with the Chicago Bears while Fangio was the defensive coordinator. Donatell and Fangio had those same positions for four years before that with the San Francisco 49ers, under coach Jim Harbaugh.

New Vikings general manager Kwesi Adofo-Mensah worked in research and development for the 49ers during Donatell's last two seasons there.

O'Connell was selected to replace Mike Zimmer, who was fired after eight years with the Vikings. The 65-year-old Zimmer called plays for the defense throughout his time as head coach, directing a 4-3 defense that at its best brought clever and well-disguised blitzes and was one of the most difficult in the NFL to convert a third down against. The last two seasons were a struggle, though, and with several expiring player contracts the group was already bound to have a different look.

Donatell and Fangio have long directed a 3-4 scheme with the best pass rushers typically standing up on the edges instead of as down linemen, so the Vikings figure to undergo a wholesale change. Donatell, coincidentally, was replaced by Zimmer in 2007 as defensive coordinator of the Falcons.