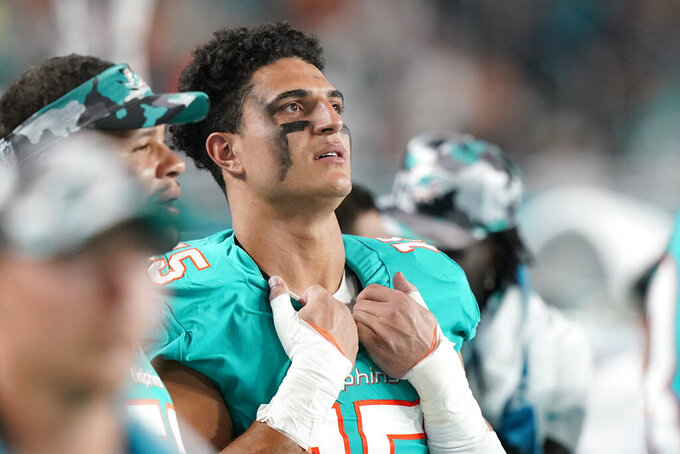 Miami Dolphins linebacker Jaelan Phillips (15) looks up as the team falls behind the Las Vegas Raiders during the first half of a NFL preseason football game, Saturday, August 20, 2022, in Miami Gardens, Fla. (AP Photo/Wilfredo Lee)

MIAMI GARDENS, Fla. (AP) — Defensive end Trey Flowers intends to sign a contract with the Miami Dolphins this week, a person with knowledge of the negotiations said Sunday.

Flowers' signing cannot occur until a roster spot opens, said the person, who spoke to The Associated Press on condition of anonymity because the team has not finalized the move.

Dolphins coach Mike McDaniel confirmed earlier Sunday that the team had Flowers in for a workout in recent days.

“What I saw was a guy that’s in shape that’s ready to play," McDaniel said. “He’s a consummate professional with a lot of versatility to his game and length. His style of football is conducive to the style we play. His versatility is attractive. So hopefully we’ll get something done here in the near future, but it’s definitely in the works.”

Flowers earned two Super Bowl rings in four seasons with the New England Patriots, who drafted him in the fourth round in 2015. He spent the last three seasons with the Detroit Lions after they signed him to a five-year, $90 million deal in 2019, an offseason in which he was one of the league's most sought-after free agents. He missed time this past season with various injuries to his knee and shoulder.

Flowers has 31.5 sacks in his seven-year career.

With linebacker Andrew Van Ginkel sidelined with an appendix issue, Flowers figures to serve a needed role in the Dolphins' pass-rushing rotation as a reserve behind second-year edge rusher Jaelan Phillips and veteran Melvin Ingram, whom the team just brought in this offseason.

By Teresa M. Walker 22 minutes ago
By Steve Megargee 7 hrs ago
By David Brandt 8 hrs ago
By Mark Anderson 9 hrs ago
By Joe Reedy 9 hrs ago