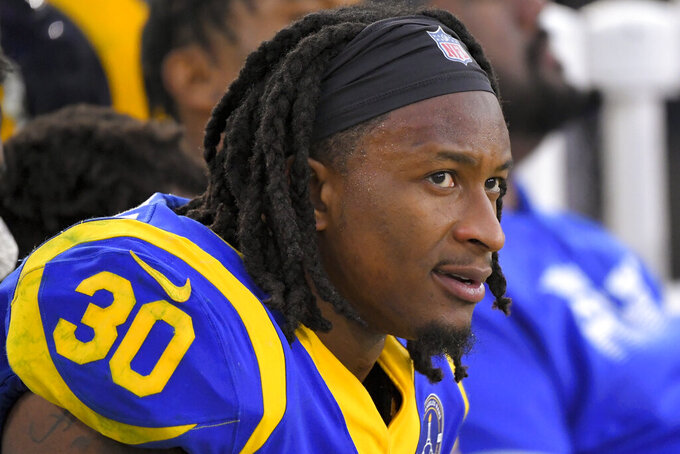 FILE - In this Dec. 29, 2019, file photo, Los Angeles Rams running back Todd Gurley sits on the bench during the second half of an NFL football game against the Arizona Cardinals in Los Angeles. The Atlanta Falcons have agreed to a one-year deal with three-time Pro Bowl running back Todd Gurley, one day after he was cut by the Los Angeles Rams. A person familiar with the deal told The Associated Press about the agreement on Friday, March 20, 2020, on condition of anonymity because the deal will not be official until Gurley passes a physical. (AP Photo/Mark J. Terrill, File)

ATLANTA (AP) — A person familiar with the deals says the Atlanta Falcons have reached agreements with wide receiver Laquon Treadwell, a former first-round pick of the Minnesota Vikings, and guard Justin McCray.

The person told the Associated Press about the agreements on Monday on condition of anonymity because the deals will not be official until Treadwell and McCray pass physicals.

It is not known when the physicals can be scheduled. The league isn’t allowing players to report to new teams immediately for those physicals during the coronavirus pandemic.

The Falcons also have re-signed cornerback Blidi Wreh-Wilson to a one-year deal.

The 24-year-old Treadwell is expected to compete for a spot behind Julio Jones and Calvin Ridley on Atlanta's depth chart.

Treadwell has had a disappointing career after he was the No. 23 overall selection from Mississippi in the 2016 draft by the Vikings. He was cut before the 2019 season before he was re-signed on Sept. 25 and had nine catches for 184 yards and one touchdown in 13 games.

McCray, 27, started in four of 15 games with Cleveland in 2019. He played his first two seasons with Green Bay.

McCray could compete with James Carpenter and Jamon Brown at left guard. The Falcons needed depth at the position after Wes Schweitzer signed with Washington as a free agent.

Wreh-Wilson had 24 tackles and seven passes defensed in 14 games, including one start, in 2019. His re-signing was important for depth after the Falcons cut starting cornerback Desmond Trufant before free agency.

The moves come after the Falcons previously reached agreements with running back Todd Gurley on a $6 million, one-year deal and a $48 million, three-year deal with outside linebacker Dante Fowler last week. Atlanta addressed another need when it acquired tight end Hayden Hurst from the Baltimore Ravens.