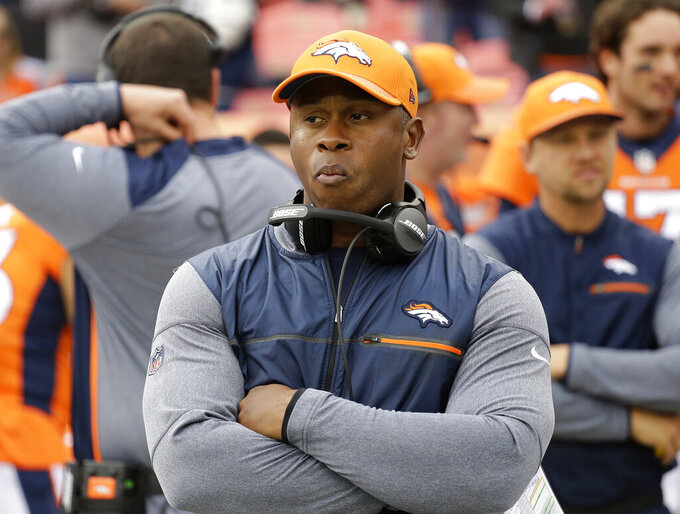 Kitchens has begun assembling his staff and will interview former Broncos coach Vance Joseph to be his defensive coordinator, a person familiar with the meeting told The Associated Press on Thursday.

Joseph, who was recently fired after going 11-21 in two seasons with Denver, will visit Cleveland on Saturday, said the person who spoke on condition of anonymity because the Browns have not confirmed their hiring of Kitchens as their 17th full-time coach.

Kitchens agreed to a deal Wednesday and his agent has been meeting with the team to work out final details.

The Browns still haven't announced Kitchens as their coach and the team has not confirmed any other coaching changes. Kitchens is not keeping defensive coordinator Gregg Williams, who went 5-3 as Cleveland's interim coach, a person familiar with the decision told AP.

Kitchens, who has never been a head coach at any level, was hired in part because of his success as Cleveland's coordinator in the season's second half along with his strong relationship with quarterback Baker Mayfield.

But because he's an offensive coach, defensive coordinator is a vital hire and the 46-year-old Joseph could be a perfect fit for the Browns.

Monken interviewed for the New York Jets' job, which went to Andrew Gase. Under Monken, Tampa Bay had the NFL's top-ranked passing attack, averaging 320.3 yards per game, but was No. 29 in rushing.

The 34-year-old Cooter spent three seasons with the Lions, but didn't have his contract renewed after this season. Detroit went 6-10 while quarterback Matthew Stafford struggled.

Cooter was a holdover from former coach Jim Caldwell's staff, but his first season with Matt Patricia did not go well. The Lions dropped in scoring while Stafford had less than 4,000 yards passing for the first time since his injury-filled 2010 season.