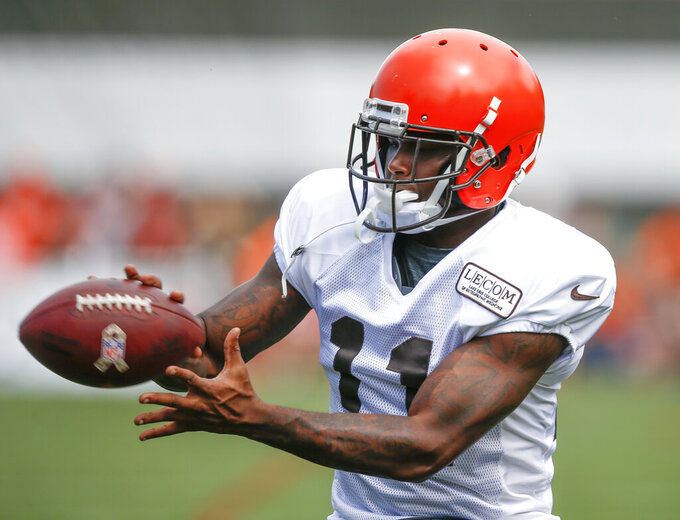 FILE - In this Aug. 12, 2018, file photo, Cleveland Browns wide receiver Antonio Callaway catches a pass during NFL football training camp in Berea, Ohio. Browns coach Freddie Kitchens said benching Callaway is a one-game punishment. Callaway did not play in Sunday’s 19-16 win over the Buffalo Bills. He was a surprising addition to the inactives list after being included in the game plan. Kitchens has not divulged his reason for sitting Callaway, who was suspended four games earlier this season by the NFL for violating the league’s drug policy. (AP Photo/Ron Schwane, File)

CLEVELAND (AP) — The Browns gave up on Antonio Callaway. The NFL is going to come down hard on him again.

A person familiar with the situation said Callaway, who was released Thursday by Cleveland hours before the team played the Pittsburgh Steelers, is facing a possible 10-game league suspension for another drug violation.

Callaway, who served a four-game suspension for violating the league’s substance abuse program earlier this season, failed another drug test, said the person who spoke to The Associated Press on condition of anonymity because the punishment has not been announced.

Callaway’s release by the Browns came after he was benched by first-year coach Freddie Kitchens for Sunday’s game against Buffalo because he didn’t get to FirstEnergy Stadium on time. Earlier this week, Kitchens said he didn’t know if Callaway got the message with the discipline.

It was the last start for Browns general manager John Dorsey, who took a chance by drafting Callaway in the fourth round last year despite a litany of off-field problems while he was at Florida.

The 22-year-old Callaway missed the first four games this season due to his league ban. He returned and caught eight passes for 89 yards in four games since his re-instatement and the Browns were holding out hope he’d mature.

That didn’t happen, so they’ve moved on.

Last year, Callaway had 43 receptions for 586 yards and five touchdowns. He talked in the preseason about putting up bigger numbers in 2019 and was confident he had put all of his off-field issues behind him.

However, he was out of shape when he arrived at training camp and his other behavior pushed the Browns to a breaking point with him.

Callaway came into the league already in the NFL’s substance-abuse program because of a diluted urine sample at the NFL combine.

With Callaway gone, Rashard Higgins will get more playing time. Higgins had been conspicuously absent from Cleveland’s game plan despite being a favorite target of quarterback Baker Mayfield a year ago.

Mayfield threw a 7-yard touchdown pass to Higgins with 1:44 to go as the Browns beat the Bills 19-16 to end a four-game losing streak.