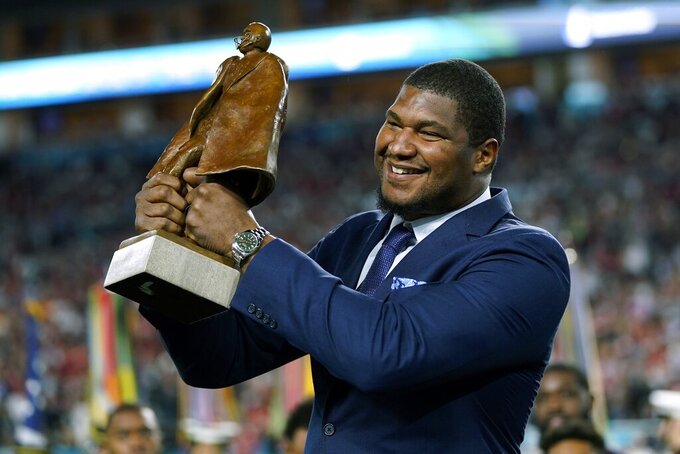 JACKSONVILLE, Fla. (AP) — The "Mayor of Sacksonville" is on the move. And the Baltimore Ravens made quite the deal to land veteran Calais Campbell, essentially giving up a backup kicker who spent time on five NFL rosters over the last eight months for a five-time Pro Bowl defensive lineman who's also the reigning Walter Payton NFL Man of the Year.

The Ravens agreed Sunday to trade a fifth-round draft pick in the upcoming draft to the Jacksonville Jaguars for Campbell, according to a person familiar with the deal. The person spoke to The Associated Press on condition of anonymity because the trade can't become official until the new league begins Wednesday.

It's a great value for the Ravens and a downright steal considering they're parting ways with the 170th overall pick, which they got by trading place-kicker Kaare Vedvik to Minnesota last August. The Vikings cut Vedvik three weeks later.

Now, they're working to get Campbell a new contract that should make one of the league's best defenses even better.

“Like anything in life, they say great things only last for so long,” Campbell said in a lengthy and heartfelt goodbye posted on Twitter. "My time in Jacksonville has been a once-in-a-lifetime experience filled with love, support and pure joy from the Duval community. ...

“They say to always leave a place better than you found it and I hope that's what I’ve done in Duval. Thank you for believing and allowing me to live out my dream. It was a true honor to be your Mayor of Sacksonville.”

The 33-year-old Campbell was due to make $15 million in the final year of his contract and would have counted $17.5 million against Jacksonville's salary cap. The Jaguars will take on $2.5 million in dead money by trading Campbell.

Campbell has made three straight Pro Bowls since landing in Jacksonville. He was instrumental in helping rookie Josh Allen make a successful transition to the NFL last year. Allen was a Pro Bowl alternate and made the all-star team as a replacement.

Campbell was voted defensive MVP of the Pro Bowl in January. He also was recognized as the league's man of the year for his charitable work.

“Your kindness and enthusiasm fueled me to be a better player and a better member of your community,” Campbell said. “It was one of the great honors of my life to wear teal and black and I’ll forever be grateful for how my time as a Jaguar changed my life.”

He has 696 tackles and 88 sacks in 12 seasons with Arizona and Jacksonville. He started every game over the last five years and has been a consummate pro on and off the field.

The Jaguars are unlikely to replace him with a fifth-round pick. It's also another sign that Jacksonville is in full-on rebuilding mode, trying to get its salary cap in better shape.

Those moves will clear about $33 million in cap space, and trading Campbell pushes the total to $48 million in savings. Jacksonville might be trying to create enough space to trade or cut quarterback Nick Foles, who lost his starting job to rookie Gardner Minshew last season and is due to count nearly $22 million against the salary cap in 2020.

The Jaguars also used their franchise tag on top pass-rusher Yannick Ngakoue last week, but the disgruntled defender has made it clear he doesn't plan to sign the tender offer and wants to play elsewhere. He also could end up on the trade block.

Only two holdovers from that team, which finished a few plays short of the Super Bowl, remain under contract: linebacker Myles Jack and defensive lineman Abry Jones.

Jacksonville now has 11 draft picks in 2020: Nos. 9 and 20 in the first round, a second, a third, two fourths, two fifths, two sixths and a seventh. The Jaguars also have an extra first and fourth in 2021.