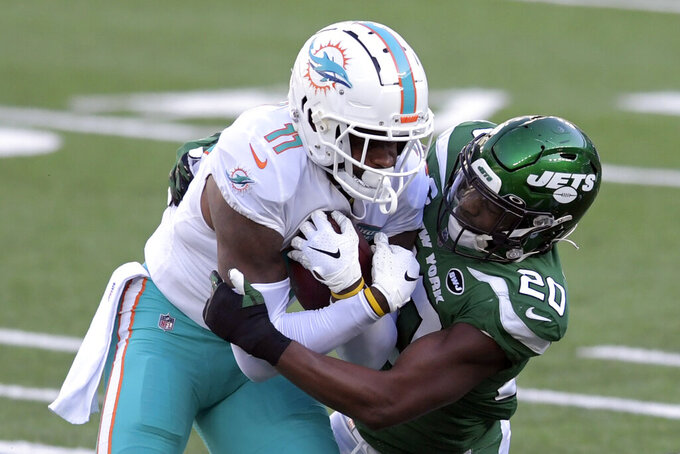 FILE - In this Nov. 29, 2020, file photo, New York Jets free safety Marcus Maye (20) tackles Miami Dolphins wide receiver DeVante Parker (11) during the first half of an NFL football game in East Rutherford, N.J. A person with direct knowledge of the move says the Jets placed the franchise tag on Maye, a steady playmaker and leader with whom the team hopes to work out a long-term deal. (AP Photo/Bill Kostroun, File)

NEW YORK (AP) — A person with direct knowledge of the move says the New York Jets placed the franchise tag on safety Marcus Maye, a steady playmaker and leader with whom the team hopes to work out a long-term deal.

The move Monday night was expected and prevents Maye from becoming an unrestricted free agent when the new league year starts on March 17. NFL teams have until Tuesday at 4 p.m. EST to use the tag on a pending free agent.

The person spoke to The Associated Press on condition of anonymity because the team hadn’t announced the move. ESPN first reported the Jets’ plan to use the franchise tag.

The tag for a safety is expected to be worth around $10.5 million this year. By using the franchise tag, the sides have until July 15 to work out a new contract or Maye would have to sign the franchise tag tender to play in 2021.

Maye, who turns 28 on Tuesday, joins Denver safety Justin Simmons as players to be franchise tagged this offseason. He's also the first Jets player to be tagged since Muhammad Wilkerson in 2016. Wilkerson was signed to a long-term contract later that summer, and that's the hope for both sides with Maye — whom general manager Joe Douglas said in January would be a top priority for the team this offseason.

The 2017 second-round pick out of Florida has been a key presence on the field and in the locker room since joining the Jets and was voted the team MVP by teammates last season. Maye was second on New York with 78 tackles to go along with two interceptions, two sacks, two forced fumbles, a fumble recovery and a team-leading 11 passes defensed.

Maye also displayed his versatility, playing in coverage as well as close to the line of scrimmage — taking over the role previously held by Jamal Adams. Those qualities would appear to be ideal fits in new Jets coach Robert Saleh and defensive coordinator Jeff Ulbrich's defensive scheme.

“Marcus is a valuable member of this organization, someone that started his career here, who’s been a pro’s pro,” Douglas said last week. "Smart, he’s been reliable and he’s provided outstanding leadership. Our plan hasn’t changed.

“We are in the process of working to have Marcus be here long term.”

Maye's agent Erik Burkhardt made some headlines last week on social media when he criticized the Jets while replying to a Twitter post about the team expecting to have around $80 million to spend on the salary cap this offseason to sign or acquire any players they want.

“Yet refuse to take care of their best player, Captain, & team-voted MVP in his prime who had several All-Pro votes,” Burkhardt tweeted last Wednesday, “and who played out his entire rookie deal and even changed positions on his contract year (after they got rid of last yrs All-Pro safety).”

Burkhardt was referring to Adams, who was locked in a bitter contract dispute last offseason before being traded to Seattle. Douglas downplayed Burkhardt's comments last Thursday while speaking to reporters.

“I have a lot of respect for Erik,” Douglas said. “I think he’s a great person, I’ve had a lot of great conversations with him and you guys know how I feel about Marcus. Look, this is part of the business. This is part of negotiating, but I don’t see this affecting our ability to get something done with Marcus that’s beneficial for both him and the team.”

Maye has played in every game the past two seasons, erasing any doubts about his health after a shoulder injury limited him to six games in 2018. He has six career interceptions, 22 passes defensed and 257 total tackles.