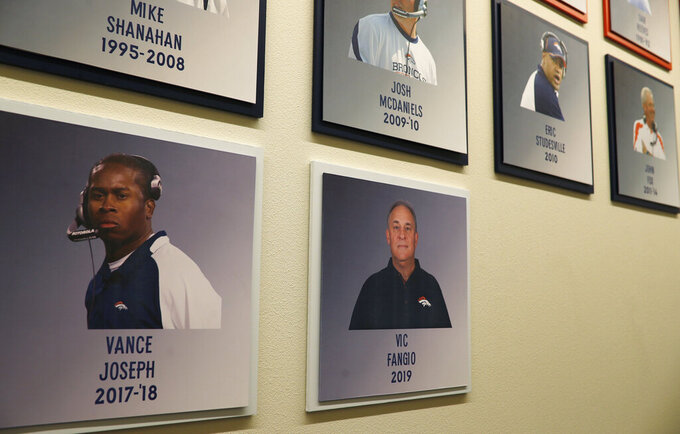 The photograph of the Denver Broncos new head coach Vic Fangio hangs on a wall outside the meeting room where Fangio was introduced at a news conference at the team's headquarters Thursday, Jan. 10, 2019, in Englewood, Colo. (AP Photo/David Zalubowski)

ENGLEWOOD, Colo. (AP) — Gary Kubiak won't return to run the Denver Broncos offense after all for new head coach Vic Fangio, a person with knowledge of the decision told The Associated Press on Friday.

The person, who spoke on condition of anonymity because of the sensitive nature of the discussions, said it became apparent over the last 24 hours that Kubiak wasn't the right fit because of philosophical differences over scheme and staff.

Kubiak had wanted to bring back some of the assistant coaches who have followed him throughout his coaching career along with dusting off schemes that were successful in another era but don't fit with the Broncos' quest to modernize their approach.

Kubiak remains under contract with the Broncos and will continue in his role as a senior personnel adviser to general manager John Elway.

After rejecting Kubiak's return to the field, the Broncos set their sights on San Francisco QBs coach Rich Scangarello, but ESPN reported that the 49ers denied Denver's request to interview him for their offensive coordinator job.

So, Fangio remains on the looking for someone who will resuscitate a Denver offense that has sputtered under four different starting quarterbacks and three coordinators in the post-Peyton Manning era.

And the surprising development with Kubiak curbs anticipation that the Broncos could go after Baltimore veteran quarterback Joe Flacco , who lost his starting job to rookie Lamar Jackson. Kubiak worked well with the former Super Bowl MVP in 2014 when he was the Ravens' offensive coordinator.

Free agent quarterback Case Keenum was underwhelming in his first season in Denver and cutting him would cost $7 million but save $11 million.

Either way, the Broncos are expected to select a QB in the draft (they pick 10th) even after getting burned after moving up in the first round to select Paxton Lynch three years ago.

Kubiak successfully maneuvered the Broncos through a minefield of adversities to lead the franchise to its third championship after the 2015 season. But he stepped down a year later, citing health concerns after Denver slipped to 9-7 and missed the playoffs.

He returned last year and helped Elway prepare for free agency and the draft, which was hailed as Elway's best.

After firing head coach Vance Joseph two weeks ago, Elway said he wants to modernize the Broncos' schemes. Denver's offense has especially stagnated while other teams, notably the Chiefs and Chargers in their own division, have innovated with the run-pass option craze and other college concepts lighting up scoreboards across the NFL.

As Fangio prepares to build Denver's fourth offensive system in as many years, the Broncos are hoping that Mike Munchak will come on board to coach their offensive line. Munchak's contract as the Pittsburgh Steelers' O-line coach has expired.

Munchak was one of two finalists for the Broncos' head coaching job and he stayed back in Denver, where his daughter lives, after interviewing with Elway last week.

After Joseph's firing, Elway said he expected Kubiak to return as an on-field offensive assistant in Denver next season and the Broncos rejected other teams' requests to interview him for their offensive coordinator vacancies.

Kubiak wasn't at Fangio's introductory news conference, which some construed as an attempt by the Broncos to keep the focus on Fangio, a first-time head coach after 32 years as an NFL assistant, and not an ominous sign that the union might not work.

"None of the assistant coaching positions have been determined yet, and until things are ironed out and iron-clad, I prefer not to comment on that," Fangio said Thursday when asked about Kubiak. "But Gary is a hell of a coach. He's a guy that I have respected throughout my career in the NFL, having competed against him at several stops. If Gary is interested, then I'm interested."

Fangio led the league's No. 1 overall defense in Chicago in 2018, and several Denver defenders are ecstatic over his hiring, including Pro Bowl cornerback Chris Harris Jr., who texted The Associated Press, "Think Fangio will be great!"

Several offensive players were equally excited about the prospect of Kubiak's return, including receiver Emmanuel Sanders, who posted videos on social media of Kubiak getting a Gatorade shower in the waning minutes of Super Bowl 50 and of Kubiak admiring the Lombardi Trophy afterward.