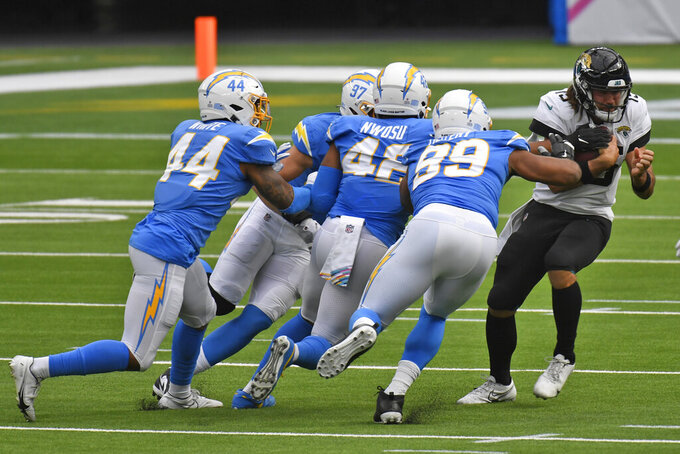 Jacksonville Jaguars quarterback Gardner Minshew, right, is brought down by a group of Los Angeles Chargers defenders during the first half of an NFL football game Sunday, Oct. 25, 2020, in Inglewood, Calif. (AP Photo/Kyusung Gong)

JACKSONVILLE, Fla. (AP) — A person familiar with the situation says Jacksonville Jaguars quarterback Gardner Minshew has a strained ligament and multiple fractures in his right thumb, an injury that could prompt coach Doug Marrone to turn to rookie Jake Luton after the team's bye week.

The person spoke to The Associated Press on the condition of anonymity Thursday because the Jaguars (1-6) have not disclosed Minshew's injury publicly. The person said the team didn't know about Minshew playing the last two games in pain until this week. ESPN first reported Minshew's injury.

Jacksonville is not required to submit an injury report while on a bye.

Minshew hasn't been sharp since throwing for 301 yards and two touchdowns in a loss at Houston on Oct. 11. He had a season-low passer rating (70.5) against Detroit two weeks ago and misfired early and often last Sunday at the Los Angeles Chargers. He completed 14 of 27 passes for 173 yards and two TDs and was sacked five times in a 39-29 loss, the team's sixth straight.

Although veteran Mike Glennon served as Minshew's backup through the first seven games of the season, Marrone and general manager Dave Caldwell said Luton won the No. 2 job in training camp.

A sixth-round draft pick from Oregon State, Luton showed an NFL arm in camp. But his lack of experience was a major concern, so they kept Glennon in the backup role.

Marrone said Tuesday he planned to shake up things during the bye week. He offered no details, but he insisted repeatedly he was “fired up” to make sweeping changes before Jacksonville hosts the Texans (1-6) on Nov. 8.

“I’m sure people are going to mock me for that or say whatever the hell they want," Marrone said. "But I really don’t give a (care). I’m fired up. I’m going to go after it and however it falls, it falls, but it’s open for me.

“I’ve done crazy (stuff) before. A lot of people don’t know. We changed an offense four or five days prior to the opening of our season in Syracuse my last year. We just went in a whole different direction and, (shoot), it worked out.”