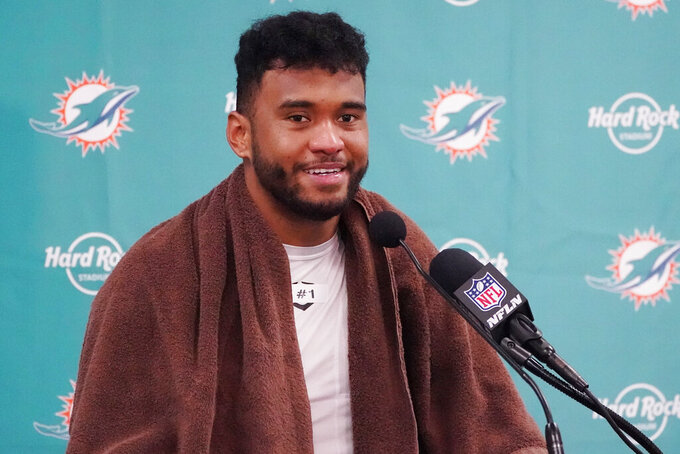 MIAMI GARDENS, Fla. (AP) — Tua Tagovailoa hit his head. Turns out, his back was the bigger issue.

Either way, he was cleared to return and played through it all.

Tagovailoa briefly left Sunday's 21-19 victory over the Buffalo Bills, returning despite appearing to be disoriented by what the team originally said was a head injury. He missed Miami's last three snaps of the first half, then returned and played the rest of the way as the Dolphins became the AFC's last unbeaten team by knocking off the Bills.

Tagovailoa’s return raised some questions. A person with knowledge of the matter said after the game that there will be a joint review by the NFL and the National Football League Players Association of what went into the decision to allow Tagovailoa to return to the game. The person spoke on condition of anonymity to The Associated Press because that probe was not revealed publicly.

By NFL rule, those in-game evaluations when concussions are suspected involve not just team medical personnel but also an unaffiliated neurotrauma consultant.

“I was kind of with everyone else. When he hit his head on the ground, I assumed it was a head injury,” Dolphins coach Mike McDaniel said. “But his legs got wobbly because his lower back was completely loose. And as he described it, he said his lower back was like Gumby or something.”

Tagovailoa completed 13 of 18 passes for 186 yards and a touchdown for the Dolphins. Where his day nearly went awry wasn't on a late hit by Buffalo's Matt Milano, he says, but rather on a play earlier where Tagovailoa got bent awkwardly.

“I kind of got my legs caught under someone and they were trying to push back and it kind of felt like I hyperextended my back or something," Tagovailoa said. “Then on the next play, I kind of hit my back, it kind of hurt, and I got up and that's why I stumbled — my back kind of locked up on me."

Tagovailoa wasn't the only quarterback banged up during the Bills-Dolphins game, one played in 90-degree heat that felt even hotter when factoring in 57% humidity. Buffalo's Josh Allen needed an X-ray after the game on his right hand, after he hit it on a helmet or face mask — he wasn't sure — in the final moments.

Allen didn't have any protection on his hand after emerging from the X-ray room.

Tagovailoa was facing a third-and-3 play from the Miami 21 late in the half when he scrambled and found Jaylen Waddle for an 8-yard gain. After releasing the ball, Tagovailoa got hit — a two-hand push in the chest — by Milano, who was flagged for roughing the passer.

Tagovailoa fell backward, the back of his helmet bouncing off the grass. He remained down for a few seconds, then rolled to his feet, jogged forward a few steps and stumbled to the ground again briefly.

A pair of offensive linemen held him up at that point, ensuring he wouldn’t fall again, and Dolphins’ medical personnel ran onto the field to check him further. They walked him off the field, directly into the tunnel leading to the Miami locker room area.

“I'm good," Tagovailoa said. “Passed whatever concussion protocol they had, so I'm good."

Tagovailoa was replaced by Teddy Bridgewater for the three plays he missed. Bridgewater attempted two passes, both falling incomplete.

On the first play of the second half, Tagovailoa found Tyreek Hill for a 22-yard gain and showed no ill effects from the hit. And when the Dolphins got the go-ahead score on a run by Chase Edmonds midway through the fourth quarter, Tagovailoa leaped into the air — again, not looking too limited.

He wore a wrap around his back after the game and will likely face tons of treatment in the days ahead. It's a short week for Miami, which plays at Cincinnati on Thursday.

“You enjoy it now, but it's a quick turnaround, so you've got to move on quick," Tagovailoa said. “For me, I'm just worried about getting my back right."

He also said he would be getting some testing on his back.

“I don't want to say that I'm a genie and I'm going to feel good tomorrow," he said. “We'll see. We'll go get some tests and then we'll come back tomorrow."