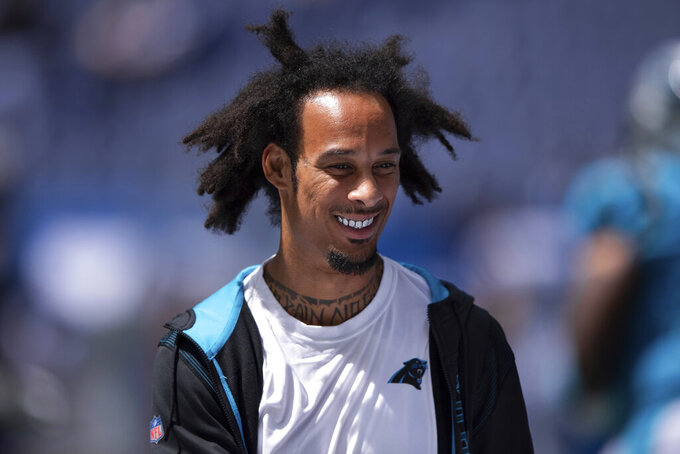 FILE - Carolina Panthers wide receiver Robby Anderson (11) walks down the sidelines before an NFL football game against the Indianapolis Colts in Indianapolis, in this Sunday, Aug. 15, 2021, file photo. The Carolina Panthers have agreed to a three-year, $37.5 million contract extension with wide receiver Robby Anderson, according to a person familiar with the situation. The person spoke to The Associated Press on Tuesday, Aug. 24, 2021, on condition of anonymity because the team has not announced the extension. (AP Photo/Zach Bolinger, File)

CHARLOTTE, N.C. (AP) — When push came to shove, Robby Anderson didn't see any reason not to sign a contract extension with the Carolina Panthers.

“The coaches, the organization, the city, everything — I just generally love being here,” Anderson said.

The Panthers agreed to a $37.5 million contract extension on Tuesday with the fifth-year wide receiver, according to a person familiar with the situation.

Anderson's deal runs through 2023 and includes $20.5 million in guaranteed money. The Panthers increased his 2021 salary from $8 million to $12.5 million. In addition, he will make $13 million in 2022 and $12 million in 2023. The person spoke to The Associated Press on condition of anonymity because the team has not announced the extension.

Anderson was due to become an unrestricted free agent after the 2021 season.

“We wanted to lock him down for a few more years and keep the continuity with the receivers and our skill positions,” Panthers general manager Scott Fitterer said. “And this is one way of doing it, being ahead of" the salary cap.

Both Anderson and Moore were 1,000-yard receivers last year.

Anderson is coming off a career season in his first year with the Panthers, catching 95 passes for 1,096 yards and three touchdowns.

He spent his first four seasons with the New York Jets with his most productive season coming in 2017 when he caught 63 passes for 941 yards and a career-high seven touchdowns.

Panthers coach Matt Rhule said Anderson has done everything asked of him, and added that he loves his durability. Anderson started all 16 games last season.

“He had been known as a deep play threat and I know when we signed him some people said that's all he is is a deep-ball guy,” Rhule said. “But he made most of his money last year across the middle, shallow catch-and-run type plays."

“Sam has a big arm and hopefully we can take advantage of the whole field with Robby,” Rhule said.

“To me it means go harder," Anderson said of the extension. "I feel like if I went from that to that, I can go to even more. The main goal ... is to win the Super Bowl.”

NOTES: Fitterer said the Panthers have confidence in Joey Slye, but will “look at other kickers” following his struggles this preseason. Slye has missed two field goals and an extra point in two preseason games. ... Linebacker Denzel Perryman was held out of practice after a teammate stepped on his foot Monday. Perryman had missed all of training camp with a hip flexor injury. Rhule said he views Jermaine Carter as the team's starting inside linebacker over Perryman. ... The Panthers cut defensive linemen Kendall Donnerson, Caraun Reid and Walter Palmore, wide receiver Krishawn Hogan and guard Marquel Harrell to get down to 80 players.