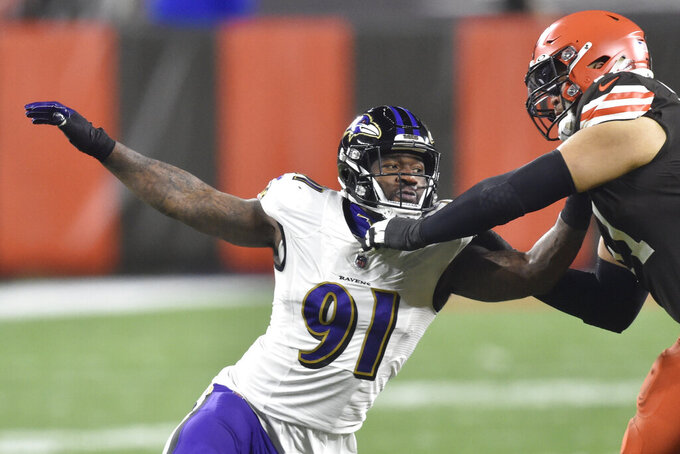 FILE - In this Dec. 14, 2020, file photo, Baltimore Ravens' Yannick Ngakoue (91) rushes the passer during an NFL football game against the Cleveland Browns in Cleveland. The Las Vegas Raiders have agreed to a two-year contract with edge rusher Ngakoue in a deal they hope fills the void created by the Khalil Mack trade in 2018. (AP Photo/David Richard)

The Las Vegas Raiders have agreed to a two-year contract with edge rusher Yannick Ngakoue in a deal they hope fills the void created by the Khalil Mack trade in 2018.

A person familiar with the deal says the two sides came to terms Monday on the first day teams could talk to potential free agents. The person spoke on condition of anonymity because the deal can’t be signed until the league year starts Wednesday.

ESPN reported the deal is worth $26 million.

The Raiders dealt Mack to Chicago three years ago and coach Jon Gruden has lamented how hard it is to find good pass rushers. The Raiders are last in the NFL with 66 sacks and 357 pressures, according to SportRadar, since the trade but now have added a piece that could solve those issues.

Ngakoue has been one of the more productive pass rushers in the NFL since entering the NFL as a third-round pick in 2016 with Jacksonville.

He joins Derrick Thomas, Aaron Donald and DeMarcus Ware as the only players to record at least eight sacks in each of their first five seasons and ranks near the top of the NFL in most pass-rushing stats over the past five seasons.

Ngakoue was traded before last season from the Jaguars to Minnesota and then again to the Ravens during the season. Now he joins Las Vegas where he will be reunited with his first NFL head coach in Jacksonville in Raiders defensive coordinator Gus Bradley.

Ngakoue will likely take a starting spot across from 2019 fourth overall pick Clelin Ferrell, who has not been a productive pass rusher in his first two seasons. Maxx Crosby can fill a more situational role after 17 sacks the past two seasons.

The Raiders also announced that they signed former Pro Bowl left tackle Donald Penn to a one-day contract so he can retire with the team.

Penn made the Pro Bowl twice in five seasons with the Raiders and wanted to return to the franchise he grew up cheering for as a kid in Los Angeles.