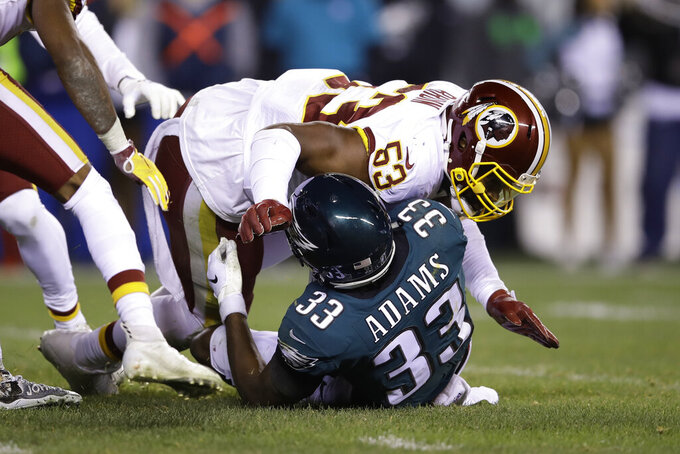 FILE - In this Monday, Dec. 3, 2018, file photo, Philadelphia Eagles' Josh Adams (33) is tackled by Washington Redskins' Zach Brown (53) on fourth down during the first half of an NFL football game, in Philadelphia. On Wednesday, March 13, 2019, the Redskins released linebacker Zach Brown and defensive lineman Stacy McGee as part of a remaking of their defense. (AP Photo/Matt Rourke, File)

ASHBURN, Va. (AP) — A person with knowledge of the move says the Washington Redskins have agreed to re-sign running back Adrian Peterson to an $8 million, two-year deal.

The person spoke to The Associated Press on condition of anonymity Wednesday because the team hadn't announced the contract.

Peterson joined the Redskins on a one-year, veteran-minimum contract in August after rookie Derrius Guice tore the ACL in his left knee. Peterson rushed for 1,042 yards and seven touchdowns in 16 games at age 33 and now will combine with Guice and third-down back Chris Thompson in Washington's backfield.

Cutting Brown and McGee saved just over $8 million in salary-cap space to use in free agency. And the Redskins are already at work on spending that money.

Washington agreed to an $84 million, six-year deal with Collins and announced the completion of the trade to acquire Keenum from the Denver Broncos. Adding Collins gives the Redskins another playmaker in the secondary if they keep cornerback Josh Norman for a fourth season.

Greg Manusky will be back as defensive coordinator; Redskins executives met with potential replacements after the season ended. Moves this week show team President Bruce Allen and the front office believe changes in personnel — not coaching — will be enough to improve a defense that ranked 17th in the NFL and struggled after a strong start.

Brown's departure by trade or release was hardly surprising after he saw "the writing on the wall" from losing his starting job in December. Brown, 29, had two seasons left on a $21 million, three-year contract he signed with Washington last spring.

McGee was a salary-cap casualty at a position Washington has plenty of young depth in Jonathan Allen, Daron Payne, Matt Ioannidis and Tim Settle. An injury limited McGee, 29, to eight games last season.

Safety has been a revolving door for the Redskins in recent years, and they could turn over both starters at the position from the start of last season. They released D.J. Swearinger late in 2018 after repeated criticism of the coaching staff, and Montae Nicholson's future is uncertain after he was arrested and charged with assault and battery in December.

The big changes aren't restricted to defense. Keenum is expected to compete with Colt McCoy, the only healthy QB on the roster with Alex Smith expected to miss all of 2019 with a broken right leg.

"We all feel great about Colt without a doubt, but he's had his injury history as well, and we anticipate a competitive camp with those two guys," coach Jay Gruden said. "And if we add a third guy via the draft or somewhere else, we'll roll the ball out there and let them play, but I feel good about Colt and Case's skill set. They are very similar, so it'll be easy to draw up plays for those two guys."