AP source: Titans have 2 new positives, none for rest of NFL 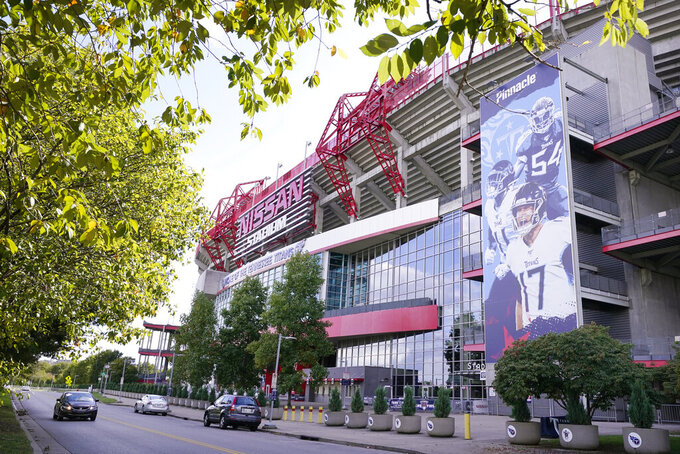 Nissan Stadium, home of the Tennessee Titans, is shown Tuesday, Sept. 29, 2020, in Nashville, Tenn. The Titans suspended in-person activities through Friday after the NFL says three Titans players and five personnel tested positive for the coronavirus, becoming the first COVID-19 outbreak of the NFL season in Week 4. (AP Photo/Mark Humphrey)

NASHVILLE, Tenn. (AP) — Another Tennessee Titans player, fullback Khari Blasingame, and another staff member have tested positive for the coronavirus, while the rest of the NFL returned no new positives on Sunday, a person familiar with the situation told The Associated Press.

The Titans' outbreak is now at 20 cases, with 18 positive tests returned since Tuesday with the addition of Blasingame to the COVID-19/Reserve list on Monday.

The results from around the rest of the league come as the NFL postponed the Patriots' game at Kansas City to Monday night. New England starting quarterback Cam Newton and Chiefs practice squad quarterback Jordan Ta’amu were both added to the COVID-19 reserve list Saturday.

Newton wrote Sunday on Instagram that he’ll use his time off from football to “get healthy and self reflect on the other amazing things that I should be grateful for.”

The person who confirmed the two new cases involving Tennessee spoke to the AP on condition of anonymity Sunday because neither the NFL nor the Titans had announced the latest results.

The negative test results Sunday include New Orleans Saints fullback Michael Burton, who falsely tested positive on Saturday. The Saints learned of the positive test after leaving New Orleans for Sunday’s scheduled game in Detroit and ran another series of tests on players and staff overnight.

Minnesota, which lost to Tennessee a week ago, won at Houston 31-23.

On Monday, the league will hold a conference call with all 32 teams to reinforce the necessity of following protocols — including updates made this week after the outbreak involving the Titans — provide updates on testing and contact tracing and to share best practices.

On Monday night, the Patriots will play at Kansas City in a game airing on CBS at 7:05 p.m. EDT. The Atlanta Falcons-Green Bay Packers game will shift to an 8:50 p.m. EDT start on ESPN.

Sunday marked the sixth straight day that at least one member of the Titans’ organization has had a positive test result return. The Titans had hoped to get back into their building Monday or Tuesday, but they must go consecutive days without a single positive result before that can happen.

Wednesday now is the earliest they can get back in their facility, which is the day Tennessee would start practicing to prepare to host Buffalo on Oct. 11.

Tennessee's outbreak appears to have started Sept. 24 when it placed cornerback Greg Mabin, who was on the practice squad, on the reserve/COVID-19 list. Then outside linebackers coach Shane Bowen’s test result came back positive on Sept. 26, and he did not travel with the Titans to Minnesota.

After the NFL postponed the Titans' game set for Sunday against Pittsburgh, the league rescheduled it for Week 7 on Oct. 25 during Tennessee's bye. The league also moved Baltimore’s bye to Week 7, so the Ravens now can play Pittsburgh on Nov. 1.

Officials from the NFL and its players’ union met with the Titans on Friday to review the situation and investigate whether any protocols were ignored.

Any further outbreaks could cause much more juggling of the schedule, with speculation that the NFL could extend the regular season into January and push the playoffs and Super Bowl back on the 2021 calendar.