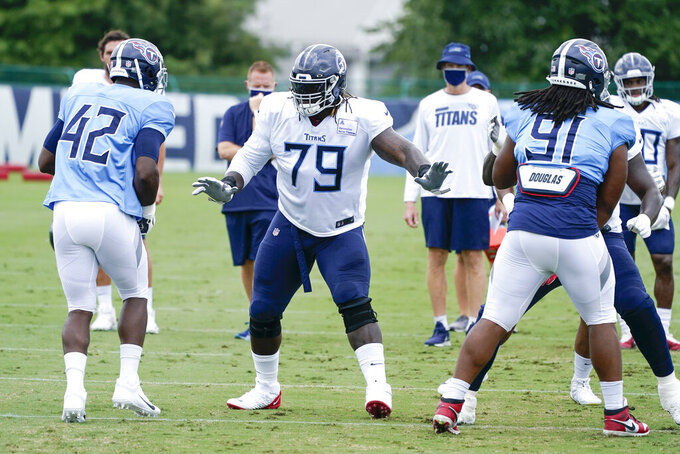 NASHVILLE, Tenn. (AP) — The Tennessee Titans have found a team in the Miami Dolphins to take their 2020 first-round draft pick off their hands, trading offensive lineman Isaiah Wilson after his rookie season.

The trade agreed to Monday night sends the 29th overall pick in 2020 out of Georgia to Miami after Wilson played only four snaps as a rookie, the person told The Associated Press. The person who spoke on condition of anonymity because neither team had announced the swap.

NFL.com first reported the trade, saying a swap of picks also is involved.

This deal caps a tenure in Tennessee that was filled with turmoil on and off the field for Wilson that included a social media post Feb. 22 that he was done with football as a Titan. The post was deleted minutes later.

The Titans suspended Wilson for a game, then placed him on injured reserve/non-football illness list on Dec. 9 to deal with what general manager Jon Robinson called “personal issues.”

Tennessee needed Wilson with three-time Pro Bowl left tackle Taylor Lewan tearing his right ACL and his replacement also wound up on injured reserve. Robinson said Feb. 16 that he hadn't spoken to Wilson since the tackle was placed on IR.

Robinson said they did a lot of work and visited with Wilson “countless numbers of times” before drafting him last April. Robinson said the person who showed up to work wasn’t the player they spent time with before the draft.

“He’s going to have to make a determination if he wants to do everything necessary to play pro football, and that’s going to be on him,” Robinson said in February.

The Titans drafted Wilson last April after letting right tackle Jack Conklin leave as a free agent. With the coronavirus pandemic pushing the NFL into a virtual and remote offseason, the 6-foot-6, 350-pound lineman didn’t get the typical rookie training.

Once training camp started, Wilson was placed on the reserve/COVID-19 list and went back on that list Sept. 6.

Wilson had only been off the reserve/COVID-19 list 12 days in August before Tennessee State University police responded to the smell of marijuana at an off-campus apartment on Aug. 15 and wrote that the player went to the second-floor balcony where he appeared to briefly consider jumping.

The rookie was arrested in September and charged with drunken driving after he was spotted doing “donuts” in an intersection before crashing into a concrete wall.

Wilson was added to the injury report with an illness before being ruled out against Cleveland. Then the Titans suspended him for the game against the Browns the day before the game for violating club rules. They placed him on IR three days after that game despite needing depth on the offensive line.

This is the second top draft pick in Robinson’s tenure that the Titans have parted with before the end of their rookie deals.

The Titans released outside linebacker Kevin Dodd in July 2018 when he didn’t report to training camp after playing only nine games combined over his first two seasons. Tennessee picked Dodd with the No. 33 pick overall of the 2016 draft.