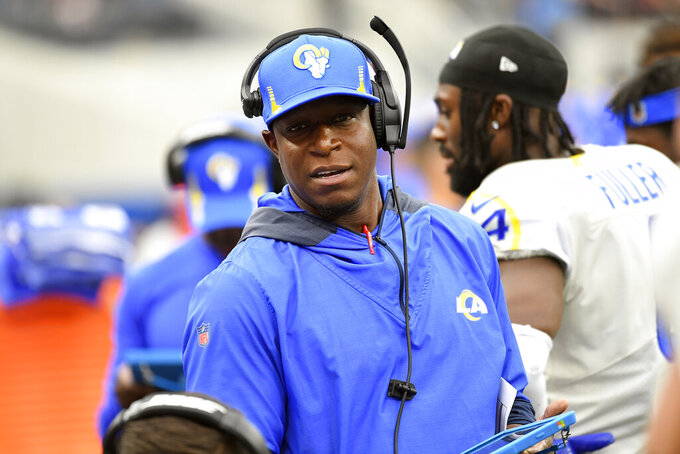 FILE - Los Angeles Rams defensive coordinator Raheem Morris talks on the sideline during the first half of an NFL football game against the Tampa Bay Buccaneers Sunday, Sept. 26, 2021, in Inglewood, Calif. The Minnesota Vikings have added Los Angeles Rams defensive coordinator Raheem Morris to their candidate list for head coach. According to a person with knowledge of the process, speaking Tuesday, Jan. 18, 2022 to The Associated Press on condition of anonymity because the organization is not announcing interviews before they're completed, the Vikings have requested to meet with Morris about the vacancy created when Mike Zimmer was fired last week. (AP Photo/Kevork Djansezian, File)

According to a person with knowledge of the process, speaking Tuesday to The Associated Press on condition of anonymity because the organization is not announcing interviews before they're completed, the Vikings have requested a virtual meeting with Morris about the vacancy created when Mike Zimmer was fired last week.

The Rams play Sunday at Tampa Bay in the divisional round of the playoffs. Morris is in his first season in Los Angeles, after six years with Atlanta. He spent time with both offense and defense with the Falcons, who promoted him to defensive coordinator in 2020. Morris was interim head coach for 11 games last season after the firing of Dan Quinn.

Brown finished his fifth season with the Eagles, the first in his current role. He previously worked two years in scouting for Indianapolis and spent two seasons with the program at Boston College. Brown played defensive back at Fordham.

Poles is in his 13th year with the Chiefs, his first in the current leadership role. He played offensive tackle at Boston College.

Raîche is in her third season with the Eagles. She was hired in 2019 as a coordinator of football operations and player personnel. Prior to that, the Montreal native worked five years in the Canadian Football League in the front offices of both the Toronto Argonauts and Montreal Alouettes.

Adofo-Mensah, who has degrees from Princeton and Stanford, finished his second season with the Browns. He came to the league from a career on Wall Street as a trader and manager.

Spytek is in his sixth year with the Buccaneers. He's a native of Wisconsin, who played linebacker at Michigan and has worked 18 seasons in the NFL with stints in scouting with Detroit, Philadelphia, Cleveland and Denver.